Barry is the rival character from Pokémon Diamond and Pearl and Platinum.

Barry has yellow hair and orange eyes. He wears a short sleeve cardigan with orange and white stripes. He has gray pants, brown boots and wears a brown shoulder bag.

Barry has the same design as in Diamond and Pearl, the only difference is that his cardigan is a jacket instead in the same design with long sleeves more appropriate for the cold climates of the region.

Barry is quite hyper and always running and moving. Barry as a childhood friend often helps the player as much as he challenges them. He is quite fond of the Gym Leader Crasher Wake. Barry is the son of Palmer, one of Sinnoh's five Frontier Brains. Barry wants to be just like his father and he trains hard to achieve this ambition. He and his father are very similar: they are constantly in a hurry, running into people, even the player, and also react the same when they bump into them.

Barry became a lot more serious, realistic, and mature after his biggest defeat against Jupiter. He also made it his goal to defeat her, which he later does after the player and him teamed up when Team Galactic were calling the two legendary Pokémon.

In Diamond & Pearl, Barry lives in the same town as the starter: Twinleaf Town, known as the player's friend and soon the player's rival in Pokémon Battles. After the news on the television about the "Red Gyarados", the player's mother in the game tells the player that he came by. When the player visits him, he tells him/her to go with him to Lake Verity. He is waiting for the player at Route 201. When the player arrives he then tells him/her about what has been showed on TV about the Red Gyarados and that he thinks the Gyarados has appeared at their lake. The player and Barry team up and go to Lake Verity, where the player sees Professor Rowan and Dawn/Lucas. Professor Rowan forgot his briefcase, so Barry and the player decide to check it out, but both of them are attacked by Starly which make them use the Pokémon that are in the briefcase.

The player and Barry are getting out of Lake Verity, after which they meet Dawn/Lucas and Professor Rowan again. He decides to give them the Pokémon that they used in the battle against the Starly. After the conversation Barry is already gone starting with his Pokémon Battle, but he will be seen again afterwards, challenging or helping the player.

In Platinum, the storyline is a bit different. Barry wants to jump over the grass to reach Professor Rowan's lab. However, the player and Barry meet Professor Rowan at Route 201 and he gives them a Pokémon of their choice. That's when Barry will fight the player for the first time. After the battle, he is trying to capture the legendary Pokémon for Professor Rowan as thanks for giving him a starter Pokémon, but he has no Poké Balls, so he goes to Sandgem Town.

Barry's artwork from Diamond and Pearl. 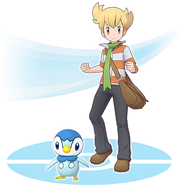 Barry and Piplup in Pokémon Masters
Add a photo to this gallery
Retrieved from "https://pokemon.fandom.com/wiki/Barry_(game)?oldid=1183317"
Community content is available under CC-BY-SA unless otherwise noted.