It evolves from Arrokuda at level 28.

Barrasweda is a fish-like, sandy brown Pokémon with a thin body. A fish spine like design runs down both sides of its body. A brown layer covers the top part of its body, as well as its tail and head. The head has a sharp end resembling a spear and two deep triangular eye sockets. Its jaw resembling a stereotypical French moustache with one big and small fang. The end of its head which connects to its body resembles Golduck, while it has one small brown fin and a bigger dorsal fin with orange scales, which are the same as the fins on the underside. Its tail is four orange sail-like appendages attached to a white piece which spins like a propeller.

Barraskewda attacks by spinning its propeller tail and using the force to charge ahead and ram at its prey, skewering them. Their jaws are very strong, as strong as Steel itself,evidenced by its variety of biting attacks in its movepool. Barraskewda are the bane of fishermen everywhere because of their uncanny habit of stealing hooked fish just before they are reeled in. These hunters are attracted to movement—such as that of a struggling fish—and can swiftly swim in to impale catches right off of their hooks. They also seem to be better at distinguishing moving animate and inanimate objects than Arrokuda. Though they are solitary hunters, multiple Barraskewda attracted to the same large quarry (for instance, a Wailord) can independently skewer the victim to bring it down; they may fight over who gets to claim the carcass afterwards.

Barraskewda resembles a barracuda, specifically the great barracuda. It may also be based on different weapons such as spears, arrows, and torpedoes and may take inspiration from spear-fishing. The tail at its rear resembles a propeller or rudder, a device which allows ships to move. With its barracuda and torpedo elements in mind, it may also be based on the Fairey Barracuda, a dive bomber aircraft that dropped torpedoes and was built in Britain (the Galar region's real life equivalent).

"Barraskewda" comes from the words "barracuda" and "skewer" or "askew". 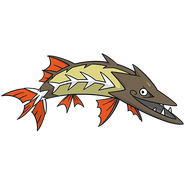 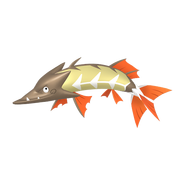