Barbaracle is a rock Pokémon with four hands having eyes on each of hand. It has 6 eyes, 1 on each arm, including the arms near his head and 2 on his head, the fist in the middle.

All the heads of a Barbaracle are connected by a single nervous system, but each individual has its own independently-functioning brain. This enables each limb to think for itself, which is valuable in critical emergencies; however, in order to work most efficiently, the other six limbs will normally follow the orders of the head, which functions as the leader of the seven. Individual Barbaracle have been known to “secede” from their bodies by dissolving the cement binding them to their rocks, however, if they disagree with the orders they are given.

While the individuals serving as the arms and legs of a Barbaracle have rather obvious purposes, the two units on the shoulders possess less clear jobs. They are known as the “scout” individuals, who use their eyes to help Barbaracle scan the entire area around them; though all eyes of a Barbaracle are fully functional, the scouts are entirely dedicated to keeping watch. These two scout limbs, along with the other appendages as well as the heads, can be used to brutally assail opponents with barrages of sharp claws and the equivalent strength of seven individuals.

Barbaracle is based on a goose barnacle and a couple of hands. It may also be based on a golem. Its hands having "a mind of their own" is based on alien-hand-syndrome (a syndrome that involves peoples hands moving independently from themselves). The eyes present on its "arms" and the two arms around its head may be based on the hamsa due to their hand-like appearance and having eyes on their palms.

Barbaracle comes from barbaric and barnacle. 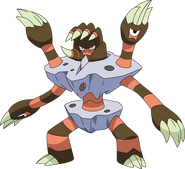 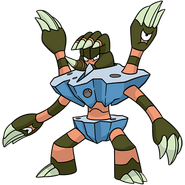 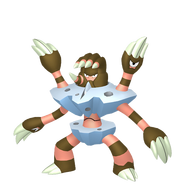 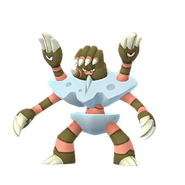