Title
In the Shadow of Zekrom!
Airdate(s)

In the Shadow of Zekrom! (イッシュへ！ゼクロムの！！ To the Unova Region! Zekrom's Shadow!!) is the 1st episode of Pokémon: Best Wishes! and Pokémon: Black & White.

Ash and Pikachu arrive in Unova and see many new Pokémon. Team Rocket also come and attempt to steal Pikachu. However, a strange Pokémon named Zekrom hits Pikachu with lightning. After meeting up with Prof. Juniper, Ash, Delia and Prof. Oak come to her lab in Nuvema Town. A new trainer named Trip comes to pick a new Pokémon. Slightly curious about Pikachu, Trip challenges Ash to a battle. Surprisingly, Pikachu is unable to use electric attacks.

The Pokémon world: a world populated by beings in sky, water and earth. One particular Trainer, named Ash Ketchum of Pallet Town, hopes to become a Pokémon Master. He and Pikachu prepare to go with Ash's mom on a trip. She comes and sets his hat. Outside, they meet up with Prof. Oak, who is dressed as a tourist. He tells they are going to Unova, so Ash and Delia enter the car. Meanwhile, Team Rocket reports to their master, reciting their goal is to capture Pokémon to rule the entire world. Giovanni orders them to go to Unova for a special task. Giovanni's secretary comes and reports there is an organization in Unova, so Giovanni tells once the trio starts acting, the organization will reveal themselves.

As Ash admires the view from the plane, Team Rocket see their enemy is here and plan on catching Pikachu. Oak tells Ash there are many Pokémon in Unova that have not been seen in any other region. After a while, Ash sees the Unova region. After they land, Oak and Delia walk away, while Pikachu moves and feels something. A Pokémon dives out, so Ash and Pikachu go to check it out. As Ash and Pikachu gaze at a strange thunderstorm, Team Rocket captures Pikachu. The latter uses Thunderbolt, but the attack is negated. Suddenly, the thunderstorm appears and a lighting hits, causing Team Rocket to be sent away, while Pikachu gets hit by lightning. Pikachu hits back, revealing a mysterious Pokémon. A young girl and Axew observe the event and go to check it out as she swings on the vines.

The mysterious Pokémon disappears, knocking Ash and Pikachu off with a lightning. Delia and Oak come and Ash claims he saw a Pokémon causing the thunderstorm. Oak gets approached by Prof. Juniper and introduces her to Ash. They ride a car to Juniper's lab, while Ash sees many new Pokémon. Juniper tells Oak she will ask him many questions about Kanto Pokémon, since they are rare around Unova, including Pikachu. They arrive to Nuvema Town and come to her lab. Soon, Pikachu gets scanned and Juniper sees nothing too troublesome, though Juniper would like new tests on him. Her assistant comes and reports a new trainer is to pick their first Pokémon. Juniper and Ash come to Trip, the newest trainer. Ash bets Trip couldn't sleep last night and remembers feeling that way. Juniper introduces Trip to Ash, from Pallet Town. Trip smiles, knowing Ash came from boonies.

Juniper sends the starter Pokémon: Tepig the Fire-type, Oshawott the Water-type, and Snivy the Grass-type. Ash knows it is a tough decision, but Trip reminds him he is deciding. Trip takes a photo and chooses Snivy, causing Oshawott to be devastated. Juniper gives Trip five Poké Balls and Snivy's Poké Ball. Trip calls Snivy back and is wished luck on the journey. Ash asks Trip if he is going after Gym Battles. Trip responds that they are a challenge to any trainer, so Ash sees this method is alike in the Kanto region. Pikachu comes to Ash, so Trip takes photos of him, as a Pikachu in Unova is a big thing. Ash does not think so, as it is his buddy, whom he traveled around. Trip wonders if it is strong and decides to challenge Ash to test them. Trip sends Snivy against Pikachu. Trip takes more pictures, as he wants to record his journey. Meanwhile, Oshawott observes.

Pikachu starts with Quick Attack, hitting Snivy, who retaliates with Tackle. Pikachu dodges the attack and goes to use Thunderbolt, but is unable and gets tackled. Pikachu tries to use Thunderbolt, but fails again. Pikachu uses Volt Tackle, but fails and gets exhausted instead, making Ash worried while Trip wonders if this is a strategy. Pikachu successfully uses Iron Tail, a non-electric move, but Snivy dodges. The latter uses Leaf Tornado, engulfing Pikachu and bashing it on the floor, defeating it. Trip is pleased he choose Snivy and calls it back, then taunts Ash. Later, Juniper sees Pikachu received an overload and cannot use electric moves. Suddenly, the system gets foiled and Pikachu begins to be electrified, as the thunderstorm approaches. The girl with Axew observes as the thunderstorm releases a lightning, which hits Pikachu.

Juniper sees the thundercloud and suspects Zekrom, a legendary Pokémon, is here. Juniper says Zekrom watches over the people and its thunderstorm judges anyone, as pillars of the sky. Ash, Oak, Juniper and Delia watch as Pikachu releases a lot of electricity.

Who's That Pokémon? / Character Eyecatch
1/4 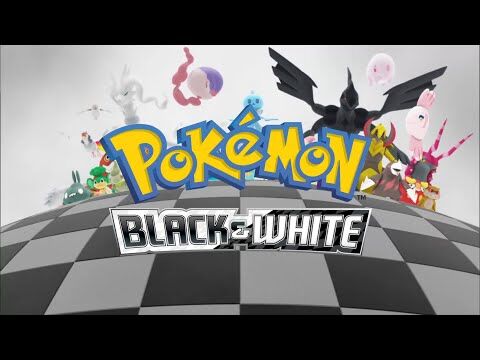 Ash and Pikachu are ready for a new adventure

Team Rocket gets a message

Ash, Delia and Oak go to the Unova region

Pikachu takes the hit from Thunder

The same cloud shows up again

A girl appears, watching the storm

Everyone experiences a blackout

Pikachu starts emitting too much electricity