The Shadow Triad (VSケルディオ VS Keldeo) is the 5th chapter of Pokémon Adventures: Volume 50.

While the Pokémon League tournament goes underway, Virizion, Cobalion and Terrakion go to their apprentice, Keldeo, to teach it their ultimate move: Sacred Sword. On their way, however, the Shadow Triad appears and attacks them. The three go on their way to a remote island, where they plan their attack on the Pokémon League. In that moment, the three remaining Gym Leaders appear: the Striation brothers Cilan, Chili and Cress.

While the Pokémon League tournament is continuing, lots of rumors and speculations are thrown about. Elsewhere, at the western coast of Unova region, near Flocessy Town, there is a small forest known as the Pledge Grove. A figure over there muses it is ready to take the test, to perfect its technique before its three mentors arrive. Cobalion, Terrakion and Virizion run through the forest, telepathically communicating with each other that they need to hurry to get to the child. Terrakion reminds if it wasn't for the calamity in Turmoil Cave, they would not be so tardy, and instead were involved in the drama. Virizion asks it what does it feel about Black, who showed a lot of courage facing them. Terrakion admits Black was quite bold to put out the fire in the cave with his Costa, and was gutsy to stand up to them to return Patrat and Heatmor, despite trembling in fear.

Virizion and Terrakion believe they could trust the boy. The former reminisces ever since they have awakened, they have encountered many people, like the Gym Leaders, who share a special bond with their Pokémon. The two ask Cobalion what does it think, to which Cobalion states they will share their powers. However, it reminds them they won't cooperate with them, as they must not forget how humans can be to start the war and endanger a lot of Pokémon. Cobalion reminds it is humans' selfishness that caused that war, and think only of their desires, and doubts they could truly be good. Cobalion believes trusting humans will only make Pokémon suffer even more. Suddenly, Cobalion stops, and fires an attack to shatter a rock.

Behind the rock, the Shadow Triad appear, who observe the Legendary Sword trio. Though they are not on Ghetsis' list, the Shadow Triad is tempted to catch them, so they won't be a threat to them. Cobalion, Terrakion and Virizion are displeased, seeing there are still selfish humans around. The Shadow Triad go to capture them, while Virizion and Terrakion charge, extending their Sacred Sword horns. Cobalion stops them, and mutters "Metal Burst". An explosion occurs, blowing away the Shadow Triad. Once the latter stand up, they see the trio has disappeared. The Shadow Triad decides to ignore this for now, and run off to complete their mission.

On a cliff, Terrakion asks Cobalion why did it stop them, since it could defeat them with the Sacred Sword. Cobalion states its instincts told it that humans see us as tools, meaning that their swords are not worth using on them. It voices that their swords could only get corrupted by battling such malicious opponents. Instead, they head off to finish their task. The trio encounter Keldeo, who refers to them as its mentors. The trio mutter Keldeo is their paprentice, and state it must equip itself with its own sword to assist them. Terrakion and Virizion state this will be Keldeo's final test, and it must use everything they taught it.

Keldeo understands, and makes a firm stand on the ground. It focuses its power on its horn, and releases an energy shooting into the sky. Virizion and Terrakion are fascinated, while Keldeo expects it'll become a part of the Sacred Swords. Keldeo goes to shatter the rock, but the power disappears and Keldeo falls down. Virizion and Terrakion laugh, seeing that Keldeo just lost focus. Since it has shown great promise, Terrakion states they will help with the final preparations. Virizion reminds Terrakion has taught Keldeo the power and charging, while Keldeo learned from Virizion the speed and charging. Finally, Cobalion taught Keldeo not to flinch, and to have a clear heart.

At the Pledge Grove, Keldeo focuses its power, and uses the Sacred Sword move to attack the rock. Keldeo smiles, as it has succeeded. Virizion and Terrakion congratulate Keldeo, and Cobalion states Keldeo did truly master the Sacred Sword move. Without further ado, Cobalion tells them to move out, as they need to follow the three humans that attacked them. Terrakion wonders why Cobalion has changed its mind, for it did say that the Shadow Triad was not worth fighting against. Cobalion understands, but reminds that they shouldn't ignore evil sins, else it would be the same as ignoring the lives of Pokémon being endangered. Keldeo asks what should it do, to which Cobalion has it join them, to show how foolish humans can be. Thus, the four Pokémon dash away to the P2 Laboratory. 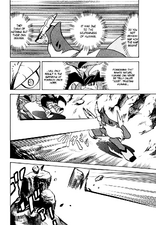 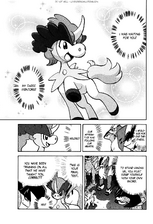 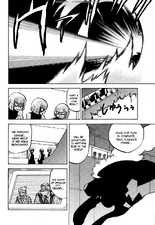 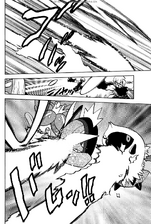 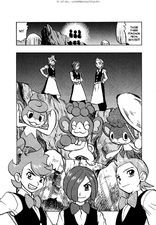 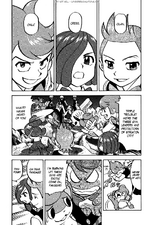 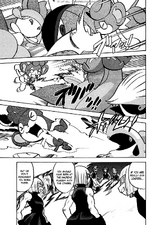 Add a photo to this gallery
Retrieved from "https://pokemon.fandom.com/wiki/B%26W055:_The_Shadow_Triad?oldid=1285002"
Community content is available under CC-BY-SA unless otherwise noted.