The town is best known for being the residence of Kurt, a custom Poké Ball creator who makes rare Poké Balls out of apricorns. He lives in the north-western area on the east edge of Ilex Forest with his granddaughter.

Azalea Town features other notable locations as well, such as the Slowpoke Well. The Gym Leader of the town is Bugsy, a Bug-type trainer. His Pokémon include Metapod, Kakuna, and Scyther. The player's rival also appears at the gate to Ilex Forest, and a battle with him is required to pass through. Azalea Town is also the only place at which Charcoal can be purchased.

In the games, this is where the player first encounters Team Rocket.

Azalea Town is a rather small town in comparison to the other towns in Johto. Azalea town has very less buildings but many trees which make it rich in Bug Type Pokémon. Azalea town, like other towns, has a Pokémon Center and a Poké Mart. It has a Pokémon Gym too owned by Leader Bugsy. He specializes in Bug Type Pokémon. It contains two houses. One of them is owned by a Woodcutter who gives the players HM Cut after they complete a mini quest in Heart Gold/Soul Silver. The other house is owned by Poké Ball Creator Kurt who makes Poké Balls from Apricorns for Players in Heart Gold/Soul Silver.

Near the gym is a small house that houses a Charcoal Kiln. The kiln is owned by a family that handles not only the production of Charcoal, but also the collection of necessary materials. To acquire the wood necessary for the charcoal the family uses a Farfetch'd to cut trees down in Ilex Forest. The wood is then treated in the kiln and turned into charcoal, which is then sold at the local Poke Mart, making charcoal the only type enhancing held item that can be freely purchased albeit at a high price.

The Slowpoke well is a large underground well where Azalea's Slowpoke live and drink. In this small Johto town, Slowpoke are placed in high regard by the community. According to the legends of the town, the Yawn of a Slowpoke causes rain, 400 years ago, a drought in Azalea town ended right when Slowpoke yawned. This is shown by the existence of Slowpoke Well in the north east corner of the town near the entrance of Route 33. The small well opening leads to an expansive two level cave heavily populated by Slowpoke, located underneath Azalea.

Slowpoke Well is where the player first encounters the revived Team Rocket in Generation II games and their Generation IV remakes, who are cutting off the tails of Slowpoke to sell at their hideout in the Mahogany Town. Before talking to Kurt in his house their will be a Team Rocket Grunt guarding the entrance of the well and not letting anyone in.

There are two floors. The first one can be explored when Team Rocket attacks, whereas the other one cannot be reached until later. Later in the game, when the player has acquired both Surf and Strength, the lower level of the floor can be explored.

Years before Ash visits Azalea Town for the first time, Goh meets Tokio while on a family trip to the town and they become fast friends. They decide to look for the Mythical Pokémon Celebi, but they don't end up finding it. Goh and Tokio promise to meet again the next day to continue their search, but Tokio never shows up and Goh ends up leaving without knowing where he went.

Ash and his friends arrived in the town for the first time in the episode A Shadow of a Drought in order to challenge the Azalea Gym, however they couldn't challenge it due to a long drought. Ash accidentally steps on a Slowpoke's tail, thus angering all the villagers. They also meet Kurt who explains them about an old legend and tells that Slowpoke is considered sacred. The heroes then manage to kick Team Rocket out of the Slowpoke Well and rain starts falling, ending the drought.

After this and giving the GS Ball to Kurt, Ash challenges the Gym, receiving his second Badge.

Goh returns to Azalea Town in Time After Time!.

Azalea Town appears to be based on the real-world city of Tsu, Mie, Japan. It is located in roughly the same place, and the azalea is the official flower of Tsu. 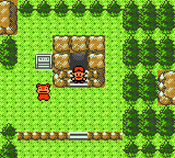 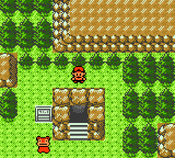 There is a hidden Full Heal behind the entrance to the Slowpoke Well. 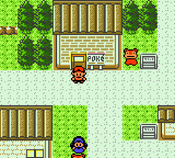 A tree containing a White Apricorn

The gate to the Ilex Forest (Gen II)