Aya in other languages

Aya is a character appearing in the Pokémon anime.

Aya is a ninja who specializes in using Poison-type Pokémon. She is the sister of Koga and has studied under him since she was very young.

Aya encountered Ash, Misty, and Brock in the Fuchsia City Gym. Aya challenged Ash to a battle with her Venonat and Ash agreed—sending out Bulbasaur. He won the match easily with his Bulbasaur's Leech Seed. After the battle her older brother Koga appeared.

Aya was training at the Pokémon Jujitsu Academy, learning Pokémon Jujitsu. She and her Venonat were unable to master it; she even faced Ash and his Bulbasaur in a rematch and lost. But after an encounter with Team Rocket, she was able to bring out her Venonat's full potential and defeat them. She then returned to the dojo to fully master Pokémon Jujitsu.

Aya made an appearance in The Electric Tale of Pikachu in "Pikachu's Excellent Adventure".

Jessie, James and Meowth were trapped in Koga's Gym while searching for the Hidden Village with Pikachu, a Charmander, a Squirtle, a Kangaskhan and Tommy. She appeared in the background during Team Rocket's battle with Koga. Their battle is only shown briefly in a montage sequence and it is unknown whether Team Rocket was victorious or not. It is also never shown if Ash himself battled Koga or Aya. 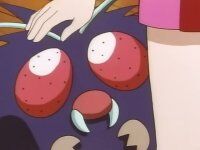