It has a Ice/Rock-type Hisuian form introduced in Generation VIII.

Avalugg is a large quadrupedal Pokémon resembling a tortoise made of ice. Its triangular head is small, with yellow eyes and tusk-like growths on the sides of its mouth, while its broad flat shell is diamond-shaped and lined with purple horizontal gouges. Its four stubby feet have three claws each and are lined with purple markings too. Avalugg's back is a resting place for its pre-evolution Bergmite.

Hisuian Avalugg is noticeably smaller than its Kalosian counterpart, weighing only half as much. This regional variant has its entire body made of stone, whilst its top, along with its head, are covered in a layer of solid ice. The head of Hisuian Avalugg is larger compared to Kalosian Avalugg, and has two large tusk-like plates on its lower jaw.

A slow but immensely powerful Pokémon, Avalugg are capable of crushing any obstacle that stands in their way. They are often seen carrying groups of Bergmite on their backs in a manner similar to an aircraft carrier. The Bergmite on their backs will lodge themselves into their crevasses, covering them in sharp and icy spikes. With their backsides protected, Avalugg will then try to crush foes with their weight. Avalugg are diurnal Pokémon; their crevasses can be observed widening in the morning sun as they go about their day before rebuilding as they rest for the night.

The Avalugg of Hisui are adapted entirely to terrestrial life compared to their amphibious relatives. Scientists believe this change may have arisen due to the steep terrain of the region, granting Avalugg that could navigate hills and mountains access to more abundant resources. In fact, Hisuian Avalugg actively avoid the sea; being part Rock-type, they consume minerals in addition to ice in order to sustain their bodies. These Pokémon use their sturdy tusks to plow through snow drifts as they make their way down slopes. Tougher than steel, these rocky growths sprout from their lower jaws and are covered in reinforced ice. They shatter boulders and icefalls obstructing their paths with ease. Medieval Hisuian travelers used to follow in the wakes of these Pokémon, taking advantage of the paths they cleared. Hisuian Avalugg take advantage of mountain shade in order to keep away from the sun. If they stay in direct sunlight for too long, their rocky bodies will begin to retain heat and melt their icy exteriors. For this reason, they will often move around mountains over the course of the day, following the shade.

An Avalugg's body is as hard as steel, providing Avalugg with high endurance as long as they are not exposed under prolonged sunlight.

Avalugg gains the abilities Own Tempo, Ice Body, and Sturdy. Own Tempo prevents Avalugg from being confused. Ice Body allows Avalugg to gradually heal itself each turn during Hail. Sturdy, Avalugg's Hidden Ability allows Avalugg to hold onto one health point.

Avalugg evolves from Bergmite at level 37.

Avalugg made its anime debut in XY120 under the ownership of Wulfric. It easily defeated Ash's Hawlucha, Talonflame, and Greninja. Avalugg later appeared in XY122 where it defeated Ash's Pikachu, but was knocked out by Talonflame.

Avalugg resembles a tortoise and an iceberg. The way it carries Bergmite on its back may be a reference to aircraft carriers, specifically Project Habakkuk, a failed attempt by the British during World War II to create aircraft carriers out of a mix of wood pulp and ice in order to get planes close enough to take out enemy submarines. Its cycle of healing during the night and cracking during the day as seen in its Pokémon Shield Pokédex entry may reference the cycle of the polar ice caps in which they grow larger in the winter but melt during the summer.

Hisuian Avalugg are inspired by elements of melting glaciers, and wedge plow trains. The concept of it being based on the scrapped aircraft carrier of Project Habakkuk (which was a British military plan during the Second World War) also becomes more evident, as it no longer shapes like a diamond when viewed from atop.

Avalugg comes from avalanche and lug.

Its Japanese name, Kurebēsu, is a portmanteau of crevasse (a deep crack in icebergs) and base. 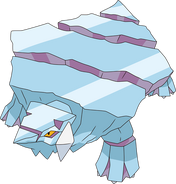 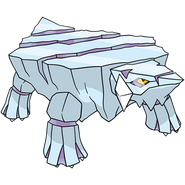 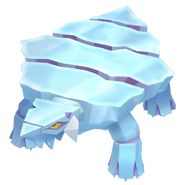 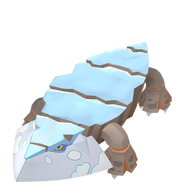 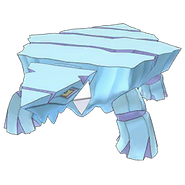