Aurorus is a huge dinosaur-like Pokémon bearing resemblance to the Amargasaurus, Apatosaurus or a Brachiosaurus with light blue colored skin, a teal stomach, and blue eyes. It has many icy gems on the sides of its body and a long, curled tail. When it emits a cry, the thin blue-tipped membrane on its head ripples with a light green color, while it attacks, the membrane turns orange. With the icy crystals that line its sides, Aurorus can freeze the surrounding air and trap its foes in ice.

Aurorus is an evolved form of Amaura, by leveling up to 39 or above at night.

Aurorus resemble a sauropod dinosaur, possibly Amargasaurus due to it being speculated it had frills. Its frills also resemble auroras and may reference the aurora borealis (referencing its Ice type on how Aurora Borealis often appears in snowy biomes). It may also be based on a queen due to the crystals along its body possibly resembling a dress, its frills resembling a headdress, and the crystal on its head resembling a crown or tiara. 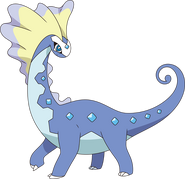 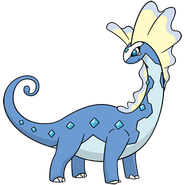 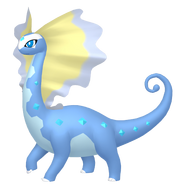 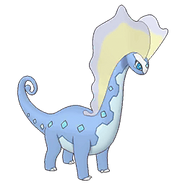 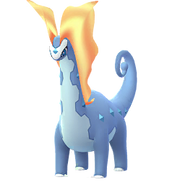