Audino is a plump bipedal creature with a cream and pink colored body. It has large ovular blue eyes and frilly pink and cream ears; long, extendable curled feelers are attached to its earlobes. The curled feelers on its ears allow Audino to listen to the heartbeats of others and determine their state of health. Egg hatching can be predicted as well. The pink pattern on its body resembles a coat, and it has a pudgy cream-colored belly and underside. Its small paws with three digits are cream colored, and it has short legs with small two-toed feet. There are pink heart-shaped patterns on the bottoms of Audino's feet. It has a white fluffy tuft for a tail.

Mega Audino has a significantly more angelic look. Most of its body is pure white, and it appears to be wearing a frilly lab coat, similar to a doctor. It has larger frilled ears with cream-colored tips that stand upright, and long swirled feelers extending from its lobes. Beneath its white "lab coat" its plump belly is cream-colored. Its face is cream colored, as well, and it has ovular bright red eyes. It has a larger fluffy white tuft for a tail, and it appears to have a similarly shaped tuft on its chest. There is a long curly white appendage attached to the tuft on its chest, which it holds in its paw (so far the function of this new feeler is unknown). It appears to be wearing white boots with wing-like tips.

Audino's sensitive feelers to perceive a person's feelings or predict when will an egg hatch. It has an acute auditory sense that allows it to understand its surrounding environment through the slightest sound.

By touching the feelers on their ears to objects, these Pokémon can pick up even the smallest sound waves; because of this, Audino are common sights in hospitals and Pokémon Centers, where they are trained to use their feelers as stethoscopes to detect irregularities in the heartbeats of patients. Their hearing is so advanced that they can also use their feelers to assess other aspects of an individual's health, including blood pressure, breathing, and digestion. Some Pokémon breeders and daycare centers also employ Audino to assess Pokémon eggs and determine when they will most likely hatch. Even without using their feelers, their hearing is still superb, being as sensitive as many artificial radars. Audino are rarely seen in the wild, as they are shy Pokémon that retreat and hide when they hear someone approaching—considering their extraordinary aural abilities, this means that they almost always are hiding from potential enemies.

Audino does not evolve. However, Audino can Mega Evolve since Omega Ruby and Alpha Sapphire by using an Audinite.

Audino possesses rabbit-like features, along with traits of a nurse or doctor; it is able to use its ears as stethoscopes.

Mega Audino has a tuft of fur on its neck that resembles and functions like a stethoscope. It may also be loosely based on angels and fairies.

Audino comes from audio (referring to its status as the Hearing Pokémon) and a pun on the phrase I dunno.

Its Japanese name, Tabunne, seems to be derived from 多分ね tabun ne (maybe) and tabun (many are heard). 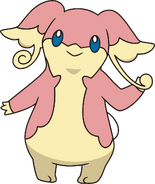 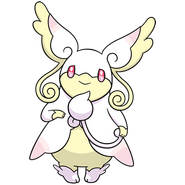 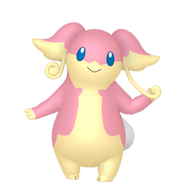 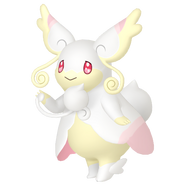 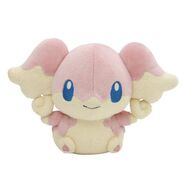 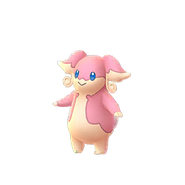