Pokémon Wiki
Register
Don't have an account?
Sign In
Advertisement
in: Male characters, Pokémon the Series: Gold and Silver characters, Articles with incomplete sections,
and 2 more

Ash Ketchum is a main character of the Pokémon Anime. He is a Trainer from Pallet Town, aspiring to become a Pokémon Master.

Ash's hair is shape and pointed and his lighting bolt-like markings are slanted.

Since entering the Johto region, Ash became independent in himself as he starts to train the Pokémon he owns instead of catching more of them. Ash still had trouble opening up to advice from others, being patient with others and taking rivals seriously, other than Gary, but began to get a little better at it. Although, Ash still kept his other traits from his previous travels while keeping his love for Pokémon.

Ash was instantly impress with Professor Elm's research. Also, Ash and his friends would run into Professor Elm during their travels in Johto and would greatly help each other no matter what.

Ash is good friends with Casey. However, when they first meet they battle each but Ash used bigger Pokémon during the battle against Casey. Although they battle again when Casey was tricked into believing that Ash was cheater by Team Rocket. However, the truth was reviled and they work together to stop them and part ways on good terms. Ash would help Casey and she has done the same for him, shown the other two times they encounter each other.

Ash and Harrison became rivals and friends during the Johto League Silver Conference. During the league, Ash and Harrison battle each other in a full six on six battle but he lost him, although it was a good battle. They part ways on good terms, after the league was over. Through Harrison, Ash found out about the Hoenn region and decided to go there as his next region for his journey.

Ash first meet Heracross in a forest it was living in and it was having trouble getting its usually tree it likes to suck on for food back, due to Team Rocket interfering. After helping it and was ready to continue his journey, Ash was followed by Heracross as it wanted to join him and he happily accepted then it became the first Pokémon he caught in Johto. After that, Ash and Heracross became close friends with each other. Ash has Heracross help him in his battles from time to time. After leaving Heracross in Professor Oak's care, Ash has call upon it a couple of times and is happy to see it when he reunites with it at the lab.

Ash first meet Bayleef when she was a Chikorita and tried to catch her but kept getting back up. Seeing this, Ash brought Bayleef to a Pokémon Center to get treated but Team Rocket stole her, which led him and Pikachu to go after them to get her back. After rescuing her and getting away from Team Rocket, Ash and Bayleef started to bond with each other. When he was gonna leave her with a Nurse Joy, Ash saw that Bayleef wanted to go with him and she became the second Pokémon he caught in Johto. However, Ash became surprised when Bayleef developed a crush on him and that she would get extremely jealous if any of his other Pokémon got his attention; in most cases, Pikachu.

After she evolved, Ash kept getting tackled by Bayleef, due to her believing that she was still small to be in his arms, as she didn't realize that she had grown so much. After this happened a couple of times, he had enough of her tackling him and believed she was gonna do it again when she was approaching him slowly, Ash lost his cool towards Bayleef as he told her to get away from him and stay away from him. After a while, Ash noticed that Bayleef, who's feelings were left hurt, ran away and went looking for her. With the help of his friends, Ash realized that his harsh words were the reason why Bayleef ran away from him. After finding her with a kind old woman that found her, Ash tried to get Bayleef to see how really sorry he was for hurting her feelings but nothing worked. When she, Pikachu and the kind old woman's Pokémon were taken by Team Rocket, Ash rushed in to save them and that act got Bayleef to realized that he truly was sorry for hurting her feelings and forgave him. After everyone was saved, Ash was also given an apology from Bayleef as well when she realized that her tackles got him to lose her cool on her in the first place.

After that, Ash and Bayleef bond for each other grew as she mellowed out but still sometimes gives him affection and she is always happy to see him whenever they reunited, after he left her at Professor Oak's lab while he continues his travels. Ash has a lot of faith in Bayleef as he notice how hard she works whenever he uses her in a Pokémon battle and his grateful when she helps him get out of a tough spot.

Ash first encounter Quilava during its time as a Cyndaquil when he heard about one living near the area he with friends were at. When it helped him and Pikachu get away from Team Rocket, Ash instantly caught Quilava as he was trying to get it away from Team Rocket's robot as it was getting ready to blow up. After catching it as his third Pokémon from Johto and stopping a boy that wanted it, Ash and Quilava formed a friendship with each other. Ash greatly helped Quilava grow, due to being the baby of the group at the time. After leaving it at Professor Oak's lab, Ash is happy to see Quilava again when he come to Pallet Town for a visit. After evolving before his fifth Pokémon League competition, Ash was very proud with Quilava in its growth in battle and abilities.

When Ash first meet Totodile, he and Misty both wanted to catch it but they ended up having a battle with each other for ownership of it, due to not knowing which of their Lure Balls was used on it first. Ash ended up winning Totodile and it became his fourth Pokémon he obtained in Johto. Also, Ash and Totodile personality match as their both energetic. That part of their personality allowed Ash and Totodile to bond with each other. Also, Ash has called on Totodile for battles or if he needed to put out anything that had to do with fire. Ash left Totodile with Professor Oak when his Johto journey ended but he is happy to see it when he comes to Pallet Town for a visit.

Ash first meet Notctowl in a forest he was at with his friends and instantly wanted to catch it, due to being a different color but failed. However, after he saved it from Team Rocket, Ash was given another shot by Noctowl as it wanted to go with him. Ash succeed in catching Noctowl and it became his fifth Pokémon he obtained in Johto. Also, Ash and Noctowl instantly became friends. Ash would call upon Noctowl to battle or to look around for something from the air. After his Johto journey ended, Ash left Noctowl with Professor Oak but he is happy to see it again when he visits.

Ash received Donphan as an Egg then hatched into a Phanpy as his sixth and final Pokémon he obtained in Johto. However, Ash ended up scaring the newborn when he had Pikachu send Team Rocket blasting off with a Thunderbolt attack. Ash tried to get Donphan to come out as he wanted to assured it that it was an accident and this led Pikachu to blame himself for having it run away from them. When he found it, Ash saw that Team Rocket was using Donphan to catch Pikachu, due to it being easily trusting at the time. Finding them in a river, Ash saved Donphan and Pikachu, which led it to know who its real friends were. After that, Ash and Donphan formed an unbreakable friendship with one another. Ash left Donphan with Professor Oak when his Johto journey ended. When he returned from his new journey and was getting ready to set off on a new one, Ash saw that Donphan wanted to join him for his new adventure, which he accepted and that led to its evolution. After evolving, Ash called upon Donphan from time to time in battle due to noticing its newfound strength and abilities. Once his second journey through Kanto ended, Ash left Donphan with Professor Oak once again but he does still call on it for help in battles.

Although he never caught it, Ash took care of Larvitar in Johto and was given to him as an egg from Professor Elm. Ash instantly earned Larvitar trust and was the only person it would open up as it wasn't very trusting of others, especially Brock and Misty. After returning to its home at Mt. Silver, Ash and Larvitar went their separate ways but promise to always be friends.

Ash heard that there was a region called Johto and traveled there to find and catch new Pokémon unseen in Kanto. He battled the Gym Leaders there and caught the three Starter Pokémon, just as he'd done in Kanto. Brock returned and left Professor Ivy, for unknown reasons, and Tracey remained at Professor Oak's Lab in Pallet Town. During this portion of Gold and Silver, Ash won two badges for the Johto League, by facing Falkner of the Violet City Gym and Bugsy of the Azalea Town Gym. He also catches a Shiny Noctowl, had another battle with Misty and said goodbye to his Charizard as he left it at the Charicific Valley so it could become stronger.

Ash won three more badges, but was delayed from having his sixth Gym Battle as the Olivine City Gym Leader, Jasmine, was preoccupied with caring for an ill Electric Pokémon, Ampharos, that fueled the lighthouse's power. Determined to get his Gym Battle, Ash traveled over to Cianwood City to get the medicine needed for Ampharos. Along the way he meets the Gym Leaders Whitney, Morty, Jasmine and Chuck, along with some new friends like Sakura, an aspiring Trainer and one of the 5 Kimono Sisters and reunites with Casey, whose Chikorita evolved into Bayleef. After his Gym Battle with Chuck, Ash and his mates traveled to the Whirl Islands on Chuck's suggestion to take part in the Whirl Cup Competition, a tournament for Water-type Pokémon.

After competing in the Whirl Cup Competition, Ash finally collected the remaining three badges to enter the Johto League by beating Jasmine, Pryce and Clair. He also met Lance and stopped Team Rocket's latest scheme at the Lake of Rage and brought a Larvitar back to its mother.

In the Johto League, he battled his old rival Gary and finally defeated him, bringing their long rivalry to an end, then fought Harrison from the Hoenn region, who had a Blaziken, a Fire-type Pokémon Ash had never seen before. To face it, Ash chose his trusty Charizard: the two Fire-types fought fiercely, but ultimately Charizard fainted and Ash lost to Harrison (however, Charizard managed to wound Blaziken badly enough to prevent Harrison from using it in his next match, which led to his own defeat). Ash then decided to travel to the Hoenn region, but sadly, both of his friends had to return home and thus would not be traveling with him this time. 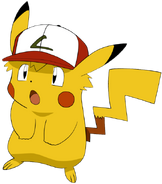 Ash as Ashachu
Community content is available under CC-BY-SA unless otherwise noted.
Advertisement