All Torkoal, No Play

At Professor Oak's laboratory
This Torkoal is a Fire-type Pokémon owned by Ash. It is the fourth Pokémon caught by Ash in the Hoenn region. It is also the fifth Pokémon on Ash's Hoenn team with Swellow, Sceptile and Corphish.

Torkoal is shown to be a bit naive and sensitive, as it cries whenever someone else cries.

Torkoal cries when feeling over excited and sad, and sometime blows a lot of smoke. Additionally, Torkoal cries for feeling bad to a Pokémon who lost something valuable, as seen one time it dived into the sea to help a Spoink find its pearl despite the fact that it couldn't swim.

Torkoal was found under attack by a bunch of Steel Pokémon in the valley. When Ash arrived to rescue it, it ran off but eventually followed Ash's instructions and defeated the Steel Pokémon.

It is an emotional and sensitive Pokémon which has been known to burst into tears, and blow smoke out of its nostrils, when happy. Torkoal hasn't been in many gym battles but is used in standard battles on many occasions and proves its strength in those battles.

Torkoal's first gym battle was against Norman in Balance of Power. Ash choose Torkoal to battle Norman's Slakoth after Pikachu was called back and defeated Slakoth with a single Flamethrower. But it got defeated by a powerful Scratch attack from Norman's Vigoroth.

Torkoal was one of the Pokémon that Ash used during the Hoenn league championships. Its only actual victory during the tournament was against Tyson's Shiftry.

After the Hoenn League, Ash decided to give it some time off at Professor Oak's Laboratory. He later used Torkoal to battle Brandon's Registeel. Although Torkoal had the type advantage and had learned the powerful Heat Wave attack, Registeel was too powerful and although Torkoal exhausted the legendary Pokémon it lost the battle.

In the Sinnoh League, Torkoal was used against Tobias' Darkrai but was defeated with one attack. 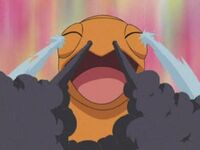 Ash hugging Torkoal
Add a photo to this gallery
Retrieved from "https://pokemon.fandom.com/wiki/Ash%27s_Torkoal?oldid=1316871"
Community content is available under CC-BY-SA unless otherwise noted.