Name
サトシのオオスバメ
Official
Satoshi no Ohsubame
Literal
Satoshi no Oosubame
Voice actor(s)
Unshō Ishizuka
Notes
Depending on the context, "の" may be the possessive, unless it is used in the name of a character, Pokémon, or fossil.

You Never Can Taillow

Name
サトシのスバメ
Satoshi no Subame
Voice actor(s)
Natsuki Yoshihara
Notes
Depending on the context, "の" may be the possessive, unless it is used in the name of a character, Pokémon, or fossil.

Title
Cantonese
?
(?)
Notes
Depending on the context, "的/嘅" may be the possessive, unless it is used in the name of a character, Pokémon, or fossil.

This Swellow is a Normal/Flying-type Pokémon owned by Ash. It is the first Pokémon caught by Ash when he first came to Hoenn.

As a Taillow, it shows as the leader of its flock and was responsible for stealing food such as Max's chocolate cookies. In battles, it shows its vigilance in fighting but it is also stubborn when it was not backing down the fight despite being battle with a type disadvantage. It has the will to fight other Pokémon while in the brink of fainting which made Ash capture it to end the match. It is also seen as a nice Pokémon after being defeated. As a Swellow, it shows its seriousness and serves as an aerial scout for recon similar to Noctowl and the other bird-like Flying-Type Pokémon Ash had caught.

Ash first captured Swellow when it was a Taillow. It had stolen Max's chocolate and engaged in a battle with Pikachu. Despite having a type-disadvantage against Electric-types, Taillow stubbornly continued to fight until it succumbed to its exhaustion and was captured.

Taillow first battled Nicholai's Zigzagoon. Since it was its first major Pokémon battle with Ash, Taillow's skills matched with the opponent's as well. The battle's end was unknown. Taillow fought and lost to Anthony's Pelipper when a Magby inside used Flamethrower on it.

Taillow had its first Gym battle with Ash against Brawly's Machop. It landed powerful hits from Wing Attack, but was taken out by a devastating Cross Chop. In the rematch, it was switched out for Corphish.

Taillow battled Drew's Roselia and managed to outmatch a powerful Petal Dance, but got paralyzed by Stun Spore after coming in too close and losing the match. It also lost to May's Torchic after exposure to Ember.

It also entered with Ash in the PokéRinger tournament. Using its determination and strong aerial skills, Taillow managed to get to the final round of the tournament. Taillow and Ash faced James with Jessie's Dustox. In the battle, they fought strongly until a sandstorm appeared. Taillow flew in the storm, but was immobilized in the process. With strong and persistent confidence, Taillow suddenly yells to evolved into Swellow and broke free from the sandstorm with Wing Attack and flung the ring onto the goal and won. Swellow also manages to cut off the net using Wing Attack to rescue the captured Pokémon allowing Pikachu blasts them off with his Thunderbolt.

After evolving during the Pokémon Ring Contest, Swellow has partaken in many of Ash's battles in Gyms and Leagues and has got a good amount of wins under its wing. It participated in Ash's sixth Gym battle with Flying-typed Gym Leader Winona of Fortree City. It fought her Shiny Swellow, despite it having more powerful attacks including Hyper Beam. Ash's Swellow recovered after taking hits from Hyper Beam and created a dust cloud to blind her Swellow while slowing it down and taking it out with a Wing Attack, winning Ash's Feather Badge.

Ash later taught Swellow how to use Aerial Ace. They struggled, but managed to master it with help from Vladimir's Pidgeotto.

Swellow continued to become strong and determined like Ash. It teamed up with Pikachu in two double battles with Tate and Liza in the Mossdeep City Gym. The first battle was interrupted by Team Rocket. During the second battle, Swellow and Pikachu struggled against the two Gym Leaders' Pokémon. Swellow used its new technique, Double Team, to distract the two opponents while in the air. Pikachu then used Thunder in the clouds, which hit them both. By storing the electricity in their bodies, Swellow and Pikachu turned it into Thunder Armor, and Swellow used it to take down Lunatone with a powerful Aerial Ace while Pikachu defeated Solrock with Iron Tail.

Swellow was used to battle Juan during his Gym battle at the Sootopolis Gym. It then strongly fought against his Wiscash, but got Tickled and hit by Hyper Beam. It then recovered and knocked it into the air using Aerial Ace. In the air, it dodges Hyper Beam and slams Whiscash with a powerful Quick Attack, sending Whiscash into the water. But before it did, Swellow knocked it out with Aerial Ace. Against Juan's final Pokémon, Milotic, struggled hard to fight off the Water-type by dodging Hydro Pump and struck with Aerial Ace. After using Double Team, Milotic used Twister to destroy the clones and hit Swellow, knocking it out.

Swellow was used in many Pokémon battles during the Ever Grande Conference in the Hoenn League. In two of these battles, the ones against Katie and Tyson, Swellow defeated two of its opponents in a row and when battling Morrison it fought his Gligar to a draw.

Swellow was one of the four Pokémon besides Pikachu that Ash took with him to challenge the Battle Frontier in the Kanto region. It teamed up with Corphish when they fought against Dome Ace Tucker's Arcanine and Swampert. After a long battle, Swellow landed a powerful Aerial Ace on Swampert while Corphish used Crabhammer on Arcanine, defeating them both and ending the battle.

Swellow was used again when it fought Palace Maven Spenser who had his Venusaur defeat Ash's Heracross. After changing tactics from Ash, Swellow easily dodges Venusaur's Vine Whip and Razor Leaf attacks. At a beach, Swellow dodged all of Venusaur's attacks using a Double Team/Quick Attack combination. A powerful Aerial Ace finally defeats Venusaur. Swellow fought Claydol but was quickly defeated by Hyper Beam. It went up against the legendary Pokémon Deoxys.

After journeying through the Battle Frontier, Swellow was left at Oak's Lab in Kanto when Ash left for his journey to Sinnoh. In The Semi-Final Frontier!, Swellow was used in the Sinnoh League battle against Tobias but was defeated by his Latios's Luster Purge without landing a single hit.

Swellow was mentioned, along with Ash's Staraptor by Professor Oak when Ash decides to trade his Unfezant for his Charizard and both will be thrilled to see a new friend.[1]

Swellow was in a photo with Ash and all of his Pokémon on the mantlepiece at his home.[2]

Swellow is set to appear in JN114. 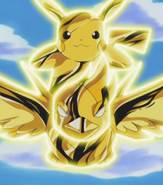