Name
サトシのマグマラシ
Satoshi no Magumarashi
Voice actor(s)
Yūji Ueda
Notes
Depending on the context, "の" may be the possessive, unless it is used in the name of a character, Pokémon, or fossil.

"Good 'Quil Hunting"
This Quilava is a Fire-type Pokémon Ash caught in Johto that evolved from Cyndaquil shortly prior to the Lily of the Valley Conference.

As a Cyndaquil, Quilava can be seen as a shy but determined Pokémon. It also had initial problems of using Fire-Type attacks which Quilava is unable to releases the fire from its back, which resulted in a loss from the Trainer's Skarmory leading Ash to make a training regimen to master its abilities.

In an Old Family Blend!, Cyndaquil also shows his fear of getting captured by someone else as it was seen being demonstrated by Team Rocket in showing their plans of capturing it.

Upon evolving as Quilava, it becomes serious, confident and a vigilant Pokémon as its serious behavior is similar to Macy's Quilava when it was in battle. It is also shown as a powerful demonstrator which it uses its newly learned Eruption to destroy Team Rocket's robot to blast them away.

At first, Cyndaquil had difficulty using its Fire type moves which saw it lose to a Steel-type Pokémon, Skarmory during GS036: Hot Matches!.

As such, it embarked on a training regime with Ash and it also finally gained the ability to ignite the flames on its back at will with the training also raising Cyndaquil's attack and speed.

Cyndaquil also beat Skarmory in a re-match. It also eventually mastered Flamethrower and was capable of using it with such power that Jasmine's Steelix was roasted within its own Sandstorm.

Cyndaquil was used frequently in the Johto region and it was left at Professor Oak's lab when Ash went to Hoenn.

While training for the Sinnoh League, Ash brought Cyndaquil with many of his other Pokémon by mistake. However, Team Rocket tried to cause problems by capturing Cyndaquil as it attempts to attack with its Flame Wheel but it was dodged. It's Flame Wheel also causes to make Ash found it along with its group and Bayleaf as both Totodile, Corphish and Dawn's Piplup extinguished it with their powerful abilities. Despite Ash's protection as Team Rocket replaces with more weapons after it was cut off by Bayleaf's Razor Leaf, Cyndaquil becomes scared while trying to avoid getting captured. When everyone's attack does not affect Team Rocket's robot, Cyndaquil tries to fight and attacks it with Flamethrower but it didn't do a thing causing Team Rocket to go after it much to its scare. As there are about to capture Cyndaquil, it suddenly evolved into Quilava much to Ash's excitement and to Team Rocket's horror and it destroys Team Rocket's robot long enough using its newly learned Eruption to blasts them off immediately. After evolving, it also scares Ash from its raging flames on its back to give him a hearty laugh.

Quilava was later sent by Ash to battle Nando's Armaldo during the Sinnoh League after it manages to defeat his Staraptor. It manages to knock Armaldo with its powerful Aerial Ace. However, due to its type, Quilava eventually fainted leaving both Pokémon in a double knock-out as both Nando and Ash to sent both Kricketune and Heracross as their last and final Pokémon.

Quilava was seen in the photo taken at the end of the series, alongside most of the Pokémon Ash had caught at that point in time.

According to Professor Oak, Quilava along with Ash's Charizard, Ash's Pignite and Ash's Talonflame are heavily spar with Ash's Infernape to battle a wild Moltres in the valley. He was seen with the rest of Ash's Pokémon upon reunited with Ash. Later, Quilava along with Charizard, Pignite, Bulbasaur and Talonflame were apologized by Infernape for his behavior and they forgiven him.

Quilava is set to appear in PJ114. 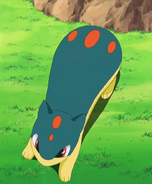 Quilava without flames on its back