This Muk is a poison-type Pokémon owned by Ash. It was the ninth Pokémon caught by Ash in Kanto.

Ash and his friends were traveling through Gringey City, which was in the middle of a blackout. The reason for this is due to the power plant being over run by a gang of Grimer. After the Grimer were defeated, the gang's leader, a Muk, challenged Ash who used Pikachu and a wild Magnemite who had been following Pikachu do to an electrical build-up. After Muk was weakened by Magnemite and Magneton, Ash managed to catch it. However, since its stench could be smelt even through the Poké Ball, Ash sent Muk straight to Professor Oak.[1]

During his stay at the lab, Muk developed an attachment to Prof. Oak and would constantly smother him whenever Ash would make a call to the lab. Muk has been used in only two major battles since it was captured; the first of which when it defeated Jeanette Fisher's Bellsprout in the fourth round of the Indigo League.[2]

Ash returned Muk to his team for a brief period where it was used to find a large Bulbasaur that was residing in the sewers.[3]

During the Silver Conference, Muk battled against Gary. It actually caused problems for Gary's Blastoise, as it was able to endure all of his attacks with ease, but it was a stalemate, as even it's strongest attack Sludge Bomb was deflected by Rapid Spin. Muk was also able to tank all of his Scizor's attacks as well, but it was thrown into the air and was hit with Swift, which was a 1 hit KO.[4]

Muk has appeared in several of the special episodes. It was shown to crush Butch and Cassidy and the Poké Balls they had stolen. It also crushed Tracey when he opened the door for Delia.[5]

Muk was transferred to Ash for a brief reunion, where it smothered Ash upon meeting him again. Muk was not seen on-screen to participate in the Sinnoh Pokémon League.[6]

Ash called Professor Oak to inform him of his loss at the Vetress Conference. However, Muk smothered him in mid-call. Ash was happy to see one of his old friends, but Professor Oak was not happy being crushed.[7]

Muk was later released by Brock to being compared with an Alolan Muk which it was released by Misty. Upon seeing Ash, Muk slumps him down in affection after he reunites with it.[8]

It made a brief appearance with Professor Oak, while observing the Meltan.[9]

Muk reunites with Ash in Advice to Goh! 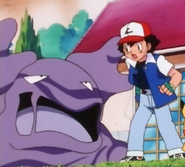 Muk wanted to be selected