Overgrow (not yet activated)

73 episodes as a Chikorita
This Bayleef is a Grass-type Pokémon owned by Ash. She is one of the Starter Pokémon Ash caught while traveling through Johto.

When she first joined Ash's team as a Chikorita, Bayleef developed a crush on Ash and was often extremely jealous if any of his other Pokémon got his attention; in most cases, Pikachu. She was also stubborn, passionate and sometimes violent. When things didn't get in her way, she would throw tantrums to express its discontent. Despite that, she still had a strong friendship with most of the Pokémon in Ash's party.

However, since evolving, Bayleef has changed and still adapted to being a member of Ash's team with some more personality traits as a Chikorita having mellowed.

Bayleef is also a tactical and powerful fighter, using her vines as a means of greatly restricting her opponent's movements.

Bayleef made her first appearance in The Chikorita Rescue when she was a wild Chikorita who Ash and his friends came across while walking through the mountains. Despite her small size, she proved to Ash that she was very tough by defeating his Bulbasaur with a single Vine Whip. Chikorita even went against very high odds to fight against Ash's Charizard. This in turn left her injured and although she wanted to continue fighting, she eventually fainted, forcing Ash and his friends to bring her to a Pokémon Center for treatment. Seeing her potential, Team Rocket tried to get Chikorita to join them. Chikorita later developed a crush on Ash and began constantly seeking for his approval, whenever she was released from its Poké Ball to engage in battle or stop Team Rocket with Ash often being left greatly embarrassed by her displays of affection for him.[2]

She was later revealed in Chikorita's Big Upset that Chikorita was jealous of Ash giving so much more time and attention to Pikachu than he was to it.[3]

In Current Events, after witnessing Ash getting attacked by Team Rocket's Pokémon, Chikorita gained the strength to evolve into Bayleef and was successful in defeating Team Rocket, sending them blasting off with Vine Whip after both Pikachu and Electabuzz's electrocute them with their Thunderbolt.[4]

Despite that, in Turning Over A New Bayleef, the newly evolved Bayleef still believed she was small enough to jump into Ash's arms, not realizing she had grown so much. While Ash was carrying lunch, he angrily told Bayleef to get away and stay away from him. His harsh words left Bayleef in tears and she ran away from Ash while its feelings got hurt. When Ash, Misty and Brock found her after spending many hours searching for her, she had been taken in by a kind old woman and she refused to accept Ash's apology. Ash, guilty over his treatment decided to stay put in hopes of getting Bayleef to forgive him but she refused his offers, ignoring and even refusing him. On such occasion, she even hit Ash with her leaf. After seeing Ash trying to save her from Team Rocket, she realized Ash truly was sorry and forgave him.[5]

Since evolving from Chikorita, Bayleef has still kept her longing feelings and crush for Ash which did end up getting her in trouble on several occasions. However, after getting used to her size, she has managed to become a vital part of Ash's team and helped win many Gym and League battles.

Ash left her at Professor Oak's Lab when he decided to make a fresh start when he left for Hoenn.

In An Old Family Blend, Bayleef was one of the Pokémon Professor Oak sent to Ash and Bayleef tackled Barry when it got separated from Ash. However, despite being called up, Bayleef didn't take part in the Lily of the Valley Conference.[6]

In BW143: Best Wishes Until We Meet Again!, Bayleef was seen with the rest of Ash's Pokémon at the lab for a group photo.[7]

Beyleef appeared in a flashback of Chuck when Ash and Chuck reunited in Cianwood City Gym.[8] 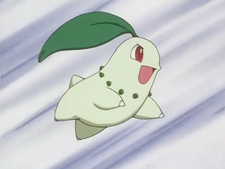 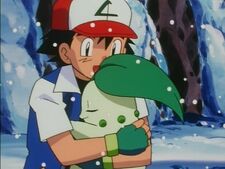 As Chikorita with Ash 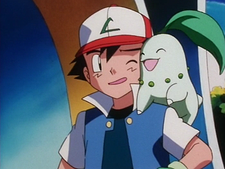 As Chikorita showing affection towards Ash 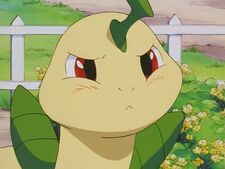 Retrieved from "https://pokemon.fandom.com/wiki/Ash%27s_Bayleef?oldid=1318400"
Community content is available under CC-BY-SA unless otherwise noted.