Arrokuda resembles a barracuda. It is very slim and has arrows on its side. It also has tail that resembles the back of an arrow.

Arrokuda are a hardy species that can tolerate both fresh and salt water. Though they seem to prefer the sea, sizable populations can be found in fast-moving rivers and large lakes as well. Arrokuda are notable for their odd hunting strategy; rather than biting prey with their teeth, they instead prefer to skewer them with their closed jaws. Arrokuda will lie in wait until they sense movement before rushing towards the first sign of prey, hoping to impale them on their sharp jaws. Arrokuda are very proud of the sharpness of these structures and will show them off to other Arrokuda to assert dominance. These Pokémon are not the brightest and commonly cause issues for boats when they accidentally pierce holes into their hulls and get stuck. Boats sailing through Arrokuda territory will often have steel-coated hulls for this reason. Anglers will wave wooden planks through the water to entice Arrokuda to skewer themselves onto them, making them easy catches. After Arrokuda eat their fill, their movements slow considerably, and they are content drifting along with the currents. This makes satiated Arrokuda a prime target for hungry Cramorant scanning the water from above.

Arrokuda resembles a barracuda, more specifically one in its young stages. It may also be based on different throwing weapons such as spears or arrows. Paired with its thin snout and its tail fin resembling a dart flight, it may also be based on a throwing dart. This can be seen when Cramorant gulps this Pokémon and shoots it (in a similar fashion to an arrow) at opponents.

Arrokuda comes from arrow and barracuda. 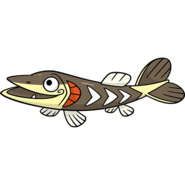 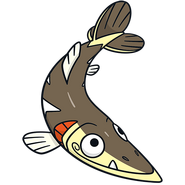 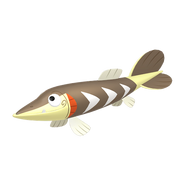