Aromatisse is a bipedal birdlike Pokémon. It is covered in fluffy magenta and violet fur; a puffy cloak of pink downy fluff covers its torso, while its head and extremities are violet. It retains the gray medieval plague doctor mask-based face which it had as Spritzee. It has bright red eyes with long tufty black eyelashes sprouting from each. Aromatisse has two wavy fur-covered ears with yellow patterns atop its head. It has short violet paws with small yellow claws and two long purple legs protruding from beneath its cloak of pink fluff. On its back it has two large black tufts resembling a bow.

Aromatisse can change its smell to a more unpleasant one in battle.

Aromatisse, the evolved form of Spritzee, can give off a variety of different smells, from a pleasant fragrance to an odor so repugnant to its opponent that it can turn a battle in its favor.

Aromatisse can be evolved from a Spritzee by trading it while holding a Sachet.

Aromatiise is based on a bird with aspects of cosmetics such as a perfume bottle (its shape) and powder puff (its fluffy body). Its bird-like appearance and association with perfume may also be based on plague doctors, who used bird-like masks and sweet scents such as perfume or flowers to deter the stench of people who had died to the plague. Its fluffy body also resembles the dresses worn by flamenco dancers while its face resembling a plague doctor's mask may also make it based on a masquerade dancer.

Aromatisse comes from aromatize, referring to its scent, and possibly French artist Henri Matisse, as Kalos is based on France. 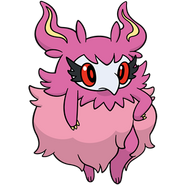 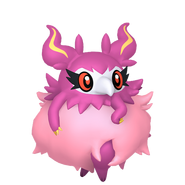 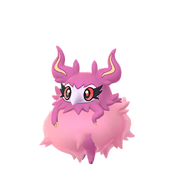