A Pokévision of Things to Come!

Aria has an alias, Ariana (エレーナ, Ellena), which she uses to disguise herself.

Since Aria is fashionable, she wears a wide variety of clothes. One of her most common outfits consists of a white blouse with a black collar, a pair of long, white gloves, and a blue striped necktie. She also wears a yellow and pink striped skirt, blue striped stockings, pink shoes, and a light blue bow on her head.

During the master class tournament, Aria wore a mainly white dress with yellow sides and a dark blue upside-down heart. She wears a dark blue underskirt beneath that and has a golden necklace with a cross as its symbol, along with medium-length white gloves. She wears light gray socks which go above her knees and knee-length white boots with heels that match her outfit.

When disguised as Ariana, Aria keeps her hair down in two twin ponytails tied by yellow rings. She wears a white collared top with frills resembling sleeves, high-waisted ankle-length black pants, and black and white heeled shoes. Her shirt also has a large hole in the back, which exposes the black bra she wears underneath. For accessories, she wears a white hat with a pale orange ribbon, a light blue bracelet, black rectangular glasses, and a black necklace that has yellow, blue, and pink triangles. She also carries around a pale orange purse.

Aria is humble, despite being the Kalos Queen, even going as far as to wear a disguise to avoid the media attention. Despite this, she also wants to see people smile when Performers show off their skills and helps them when the need arises. When she wants to settle her mind, Aria often goes shopping for new clothes. She has also taken a strong interest in Serena, always checking on her, believing that she might become her successor in the future as Kalos Queen. As revealed in the past, when Aria was injured during the Master Class finals, she didn't want to leave and give up, hinting that she has confidence as well.

Aria started off as a trainer and chose Fennekin to be her Starter Pokémon. During her journey, she started making videos on Pokévision with her partner, earning more and more popularity.[1] Sometime later, she was trained under Palermo's tutelage to become a Performer. One day, she failed in her training and injured her ankle. Palermo visited her, and Aria claimed she would not give up until everything was over.[2]

After becoming the Kalos Queen by winning the Master Class, Aria also continued to make some Pokévision videos, inspiring Serena to do the same.[1]

Later on, as Shauna explained to Serena the concept of Showcases, she told her that Aria, who made the Pokévision videos, was the Kalos Queen, who had her Fennekin evolve into a Braixen.[3] Eventually, she appeared in person for the first time, performing an exhibition performance in Lagoon Town with her Braixen.[4]

Serena, after her mother came to encourage her daughter to take on Rhyhorn racing, has dreamed of her goal to become a Pokémon Performer. Serena also remembered Aria and her performance in Lagoon Town, and she started doubting that she would become a good Performer.[5] Aria was mentioned when Palermo said that she felt that there won't be anyone like Aria.[6]

She appeared disguised as Ariana to get away from the press. Noticing Serena depressed, she had a conversation with her and asked Serena if she wanted to shop with her, because she was always busy being Kalos Queen and wanted some time off. Serena was uncertain, but agreed, not knowing who Arianna really was. After some shopping, Serena admitted that she was depressed because she yelled at her Pokémon for the bad performance, since they had failed to win the previous Showcase. Ariana claimed that Serena has to share her smiles as a Performer. To prove that, Ariana challenged Serena to a Tag Battle, sending out her Delphox and Aromatisse against Serena's Pokémon, Fennekin and Pancham. During their battle, Aromatisse used defensive moves, allowing Delphox to attack Pancham and Fennekin. Pancham tried valiantly to protect Fennekin against Delphox's attacks, causing Serena's Fennekin to evolve into Braixen. But just as they were about to finish the battle, Ariana got a phone call saying that she had to be somewhere urgent. Ariana had to call her Pokémon and leave knowing that, as the Kalos Queen, she must have been busy with Pokémon Showcase. Later on, Serena sat down and watched a Pokévision, seeing who Ariana really was.[7]

Aria was also watching Serena's second showcase from her laptop with Delphox and Aromatisse, and looked overjoyed by her victory.[8] Serena watched Aria's performance on television and told her Eevee that she was the Kalos Queen, and about her meeting with Aria.[9]

Aria made an appearance at a dance party for Pokémon Performers. Her partner was Monsieur Pierre, and at one point during the rotation dance, she was partnered with Ash. During the tag battle between herself and Ash, with Serena and Miette with James, she expressed worry over the injuries inflicted on Serena's Eevee and their potential loss. Aria witnessed Eevee's evolution to Sylveon, powered by her bond with Serena, and watched as the Fairy-type Pokémon defeated her opponents with Fairy Wind. After the party, she told her Maestra, Palermo, about Serena and Sylveon.[10]

During the Master Class tournament's opening, Aria came to the stage, welcoming the public and the Performers to the tournament. Aria wished everyone to have a great time and winked towards Serena, then walked away to watch the Performances, since the winner would face Aria and challenge her Kalos Queen title.[11]

Aria came to the stage with Serena. After Serena's performance was over, Aria started her own, having Vivillon and Delphox collide their attacks to dazzle the audience. Aria's Aromatisse lifted her up into the air, while Vivillon flew her around the stage. Serena noticed Aria's smile gave everyone strength. After Aria's performance was over, the audience voted for Aria as the Kalos Queen, and she retained her title. After Monsieur Pierre's Klefki placed a tiara on her head, Aria turned to Serena, seeing how fun this all was, while Serena promised to train more and face Aria once more. Together with their Pokémon, Aria and Serena waved to the audience.[2] 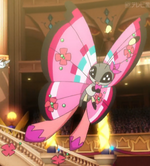 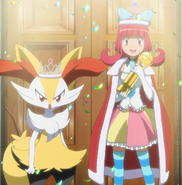 As the Kalos Queen with her Braixen

In her dance party dress

Looking at her laptop with Delphox next to her