Arctozolt is a yellow and blue Pokémon with a spiky crest and a runny nose, similar to that of Cubchoo. Its head is yellow with five spikes and always closed eyes, with blue cheeks and mouth interior. Its hands hang from a lump of snow on top of its body.

Its body appears to be mainly blue with two walrus flippers with white patterns and a tail similar to a fish.

It's unknown what Arctozolt looks like if it's a uncombined fossil from two separate fossil Pokémon.

Apparently, after the two halves of the fossils were fused to create it, Arctozolt can supposedly generate electricity via its shivers, and went extinct due to its slow movements. However, these are likely false, as it is a Pokémon made from two different fossils that each had their niches before going extinct.

Arctozolt made its debut in "A Pinch of This, a Pinch of That!", where it was restored from two different Fossils in the Wild Area. The Fossils were swapped during the restoration, which resulted in created Arctozolt alongside Ash's Dracovish. It was later caught by Goh after he befriended it.

Arctozolt appears to be based on the Crystal Palace Dinosaurs, a set of dinosaur skeletons that were misconstructed and are now deemed incorrect due to them either being mixes of more than one dinosaur or having incorrectly constructed skeletons altogether.

The head half may be inspired by paraves, a group of ancient dinosaurs that may have evolved into birds. It may also be based on the Archaeopteryx. Its body half may be based on an aquatic dinosaur due to the flipper-like appearance of its feet. This may lead it to being based on a Plesiosaur.

Arctozolt (as well as the other Galar Fossil Pokémon) having the inability to breed may reference cross-bred or hybrid animals, which are born infertile (meaning they are unable to breed or have offspring).

Arctozolt may come from arctic, zap, and jolt. 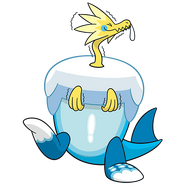 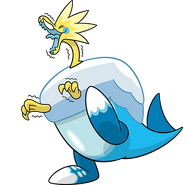 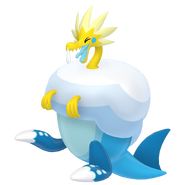