Arctovish is (or at least appears to be) a combination of a fish-plesiosaur hybrid fossil Pokémon. The plesiosaur half is colored blue and white. It has a blue tail with a fin on top. The flippers are colored blue with white patches on the end and with white spots. The fish half is applied upside down. It has a round blue head with black rectangle pupils, and the mouth is located on top of its head. It has white fins connected to its fish head.

It's unknown what Arctovish looks like if it's a uncombined fossil from two separate fossil Pokémon.

Apparently, after the two halves of the fossils were fused to create it, It has trouble eating due to its mouth being on top of its head, even though it captures prey by freezing its surroundings. The skin on Arctovish's face is impervious to attacks., It allegedly became extinct despite this due to breathing difficulties. However, these are likely false, as it is a Pokémon made from two different fossils that each had their niches before going extinct.

Arctovish appears to be based on the Crystal Palace Dinosaurs, a set of dinosaur skeletons that were misconstructed and are now deemed incorrect due to them either being mixes of more than one dinosaur or having incorrectly constructed skeletons altogether.

Arctovish (as well as the other Galar Fossil Pokémon) having the inability to breed may reference cross-bred or hybrid animals, which are born infertile (meaning they are unable to breed or have offspring).

Arctovish comes from arctic, vicious, and fish and possibly the Russian name suffix -vich (from its Ice-type). 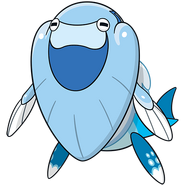 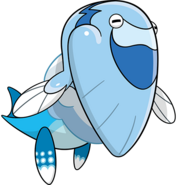 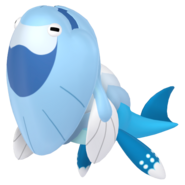