Archie is a tall, muscular man, who wears a blue bandana with Team Aqua logo on it. He also has black hair and a short black beard.

Archie has a short moustache and a pale complexion. He wears black clothes and shoes, which have Team Aqua's emblem on the chest, as well as on his back. Archie also wears a necklace.

Archie's appearance remains the same as it is in Ruby and Sapphire.

Archie has a long moustache and a tan complexion. Archie wears a blue full body swimsuit that is slightly damaged around his left biceps, with a white area around his chest and light blue and white areas on his legs. He has a ragged black cape with gray stripes in the back, which is connected to the gold chains he wears around his torso. His Key Stone is in his golden anchor necklace around his neck known as Mega Anchor.

Archie is a hardy man with a big-hearted and stirring disposition which compels his followers to be loyal. He is very charismatic, humble and is fairly friendly. Accompanied by these traits, Archie is driven and stubborn, as seen with his attempts to awaken Kyogre despite objections, gaining a sort of tunnel vision with his goals. Despite his generally amiable nature, Archie can be very strict with a low tolerance for failure. He is ferocious in battle and has a temper that he hides fairly well. As stated in the official concept art, Archie gets worked up very easily and becomes very red in the face with rage.

In Ruby, he is an ally to the player on his/her mission to stop Team Magma from expanding the land mass. He is first met at Meteor Falls with two of his members, who are in pursuit of Team Magma. He is next met at Mt. Chimney, fighting the Magma grunts with his Poochyena. After Team Magma's leader Maxie is defeated, Archie thanks the player and continues on pursuing Team Magma, who have other plans. He is finally met at Seafloor Cavern, where he shows up with Matt and Shelly after Maxie had awakened Groudon. He then tells the player that they were after them because of intense sunlight and leaves.

In Sapphire, he is the villain of the game. He is first met at the Oceanic Museum, after his two grunts have been defeated, and tells you about Team Aqua's plans. He is also first encountered at Mt. Chimney, where he uses the Meteorite to make the volcanic activity stop, therefore bringing rain to the mountaintop. He also sees you again and says that he will not allow the player to interfere and challenges you for the first time. After he is defeated, he will be forced to give up the plans for Mt. Chimney and heads off. He is next encountered at Mt. Pyre, where he stole the Red Orb from the top and heads to Slateport City to steal the submarine. He is then found at the Slateport Harbor with his administrator Matt. He suggests that you should follow him to their Lilycove Hideout. He is finally encountered at Seafloor Cavern, where he appears after the player sees Kyogre and challenges you to a rematch. After he is defeated once again, he uses the Red Orb and awakens Kyogre, but flees upon awakening. He is then found back at Mt. Pyre, where he returns the Red Orb and walks away, never to be seen again.

In Emerald, his role is the same as Maxie, where at the Oceanic Museum, he thinks you're apart of Team Magma and realizes that you couldn't be dressed for that part. After Maxie is defeated at Mt. Chimney he thanks you, but also asks if you're on his side or the other. He then says that it isn't important and says he will go after Team Magma and leaves. He is then found at Mt. Pyre where he tells you that Team Magma is ahead of them and leaves with the Red Orb and heads off to Slateport City, where you must visit after being done at the Magma Hideout. He is also found at Seafloor Cavern, where he will challenge you for the first and only time. After being defeated, he awakens Kyogre but flees the same way. He is next found at Sootopolis City alongside Maxie trying to stop Groudon and Kyogre from fighting. He is finally seen at Mt. Pyre, again with Maxie to return the orbs.

In Omega Ruby, Archie serves as a similar role to that of Ruby, but instead of being an ally, he warns the player to "steer clear and keep the nose clean" and not to interfere witn them. In the Battle Resort, he also note about a slightly different world in which Team Aqua successfully awakens Kyogre for their goals, but soon thinks about that being nonsense. After calling Matt to give the player a Sharpedonite, he leaves.

In Alpha Sapphire, his role is similar to that in Sapphire, but he steals the Blue Orb instead of the Red Orb. During the Delta Episode, he battles with Zinnia in the hideout but loses by the time the player comes, and Zinnia soon steals his Key Stone from the Mega Anchor. Thinking about that the Mega Stones he has serve no purpose without a Key Stone, he commands Matt to give the player his Sharpedonite. During the ending of the episode, he thinks that his actions were "absolutely unforgivable", and carries out reforms so that they step in a new direction that was originally thought to be a bit scary at most. 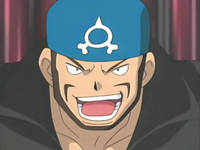 Archie in Pokémon the Series (anime)