Archer in other languages

Archer is a young man with fair skin, spikey aquamarine hair, and teal eyes. He wears a long white sleeve shirt with a black undershirt and the Team Rocket emblem printed near his right sleeve. He also wears a black belt, white pants, and white shoes.

Ambitious, cunning with great leadership skills. Archer does a decent job in taking over Giovanni's role as Director. At one point, he even disguises himself as his former superior to throw-off the protagonist. In battle, Archer is formidable and shouldn't be underestimated as he possesses some fairly powerful Pokémon.

He appears in the Goldenrod Radio Tower as an opponent. Once defeated, Archer disbands Team Rocket for good as he believes that Giovanni has left them for good. When he leaves, the Director comes up from the elevator and gives the player character a Rainbow Wing or a Silver Wing depending on the version of the game. 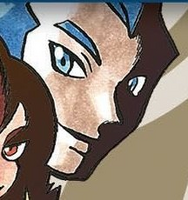