Araquanid looks like a six-legged spider with a bubble surrounding its head.

Despite what its appearance, It acts as a caretaker for Dewpider, It's kind and caring nature to vulnerable Pokémon and Valuable items, Araquanid will protect them with its bubbles including it's Trainers if they don't watch out. It uses the bubble around its head as both a weapon and a protective shield. It will headbutt enemies with it, and small Pokémon can be sucked in and drowned. Subdued prey can also be stored inside when Araquanid is not hungry.

Like Dewpider, It can breathe underwater but can't breathe air when going on Land, so it wears a bubble around its head to dissolved oxygen in the water bubble to breathe.

This Pokémon has two abilities—Water Bubble and Water Absorb. Water Bubble reduces the effectiveness of Fire-type attacks and prevents burns. The bubble around its head also gives Araquanid more power when Araquanid headbutts an opponent. Water Absorb allows it to restore 1⁄4 of its HP when hit by a Water-type attack.

Araquanid is based on a diving bell spider, although it's skinny, long legs and slender body also make it resemble a sea spider. The face-like markings on its head may be derived from the happy-face spider, which is native to Hawaii. It may also be based on a helmeted diver or astronaut.

Araquanid is a portmanteau of arachnid and aqua. 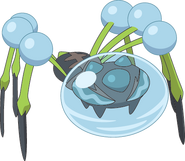 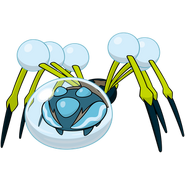 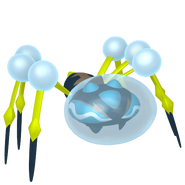