Applin is simply a green, small worm-like dragon hiding inside an apple. The only exposed parts are its eyes (which resemble leaves of an apple) and its green tail.

Applin spends the majority of its life cycle living inside an apple, which helps in protecting against natural predators such as bird Pokémon.

The apple that Applin lives inside is a food source and emits a flavor that determines how Applin is going to evolve.

Applin is based on the common depiction of a green worm inside an apple. It may also be a pun on the term wyrm, a serpentine dragon, which sounds similar to 'worm'. It is also based on the Lindwurm, a green, serpentine dragon that lives inside of mountains. It have also taken inspiration from depictions of snakes in the Bible, which are often called dragons, one of which tells Eve to eat the forbidden fruit from the Tree of Knowledge, often depicted as an apple. It may also be based on the Ladon, a dragon from Greek mythology that guarded golden apples. Considering it uses its apple as a shell, it may appear to be a literal interpretation of the apple snail.

Applin comes from the words "apple", "in", and "Lindwurm". 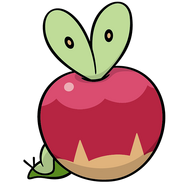 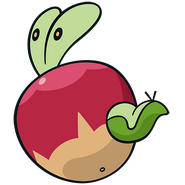 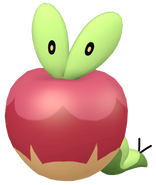