Vincent
Anthony Haden Salerno is an English voice actor and director for Pokémon, joining for Season 2 to provide additional voice direction with Jim Malone and Michael Haigney. He would later provide voices for the main series and direct the Chronicles side series. Though his involvement had initially ceased when the license was turned over to Pokémon USA, he returned to the main series as Ramos in Pokémon the Series: XY Kalos Quest. 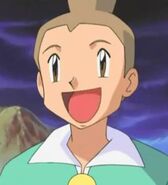 Ramos
Add a photo to this gallery
Retrieved from "https://pokemon.fandom.com/wiki/Anthony_Salerno?oldid=1415066"
Community content is available under CC-BY-SA unless otherwise noted.