Anthea and Concordia are members of Team Plasma and N's foster sisters, who have knowledge of N's background and past. They first appear in Black and White; more specifically, in the game's intro.

Though they were raised by Team Plasma along with N, they are loyal to N, and are former members of Team Plasma.

They tell the player more about N's backstory and Ghetsis. They also explain that they hold the mantle of the Goddesses of Team Plasma and were recruited to help heal N's wounded heart while keeping him company.

Both Anthea and Concordia appear in Driftveil City's Ex-Team Plasma member safehouse and they both provide more insight into N's backstory. They have no other known purpose in-game. 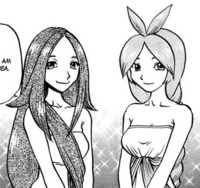 Anthea and Concordia in the games
Community content is available under CC-BY-SA unless otherwise noted.
Advertisement