Angie is a character appearing in Pokémon the Series: Diamond and Pearl.

Angie is a rude and tomboyish girl who lives in Sinnoh. She was first seen in the episode Camping it up when Ash, Brock, and Dawn, attended a Week-Long Summer School program for Pokémon Trainers. At the very start Ash thought Angie was a boy which angered Angie. They ended up fighting. Along with Brock, Dawn and Ash Angie was also a part of the Red team. She showed her confident side by testing Monferno (as a test of the Summer Academy), telling it to hit her with Ember and Mach Punch. While doing so, she dodged the practice attacks and taunted Monferno, sparking frustration. The result was that its power grew, and it beat her up to the point of bruises, which she didn't mind. In the events of episode Ghoul Daze Ash saved her from sucking into a cave, which also made Angie grow a crush on Ash.

She served as the tomboyish rival/friend for Ash, even though she develops a friendship with him and had a crush on him later on. 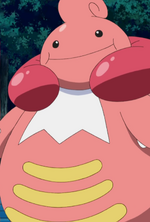