Max
DJ Mary
Winona
Amy Birnbaum is an American voice actress and singer who was best known in the Pokémon anime for supplying the voice of Max. Before Season 6 she had played various characters of the day. In September 2006, she lost the role of Max due to 4Kids Entertainment losing the rights to dub the anime, but was succeeded by Jamie Peacock. She also provided the voice of Téa Gardner in the original Yu-Gi-Oh!. 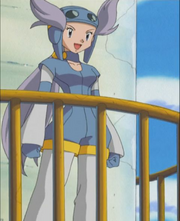 Emily from the Orange Islands

Jessie's Dustox
Add a photo to this gallery
Retrieved from "https://pokemon.fandom.com/wiki/Amy_Birnbaum?oldid=1399112"
Community content is available under CC-BY-SA unless otherwise noted.