Amber Fuji (Ai in Japanese) was the daughter of Dr. Fuji who died in a car accident when she was little. She appeared in "The Uncut Story of Mewtwo's Origin" which was featured in Mewtwo Returns.

Dr. Fuji was distraught when Amber died and began researching cloning techniques in attempt to being her back to life after she got hit by a car. He was successful in creating a chamber of light which stored what remained of Amber's consciousness. Amber's mother left Dr. Fuji who could not bear to see what he was putting himself through to bring back Amber. After Dr. Fuji's research had gained the attention of the boss of Team Rocket, Giovanni, he was given his own laboratory and scientist team to continue his research, so long as he would also make a superior clone of a legendary Pokémon called Mew.

Amber's unconsciousness was labeled Ambertwo (Japanese: アイツー) as Dr. Fuji's research continued to make a clone of his late daughter. Ambertwo managed to create a “Remember Place” which is where she spent her time. She also managed to communicate with some unconscious cloned Pokémon called Squirtletwo, Bulbasaurtwo and Charmandertwo. Some time later she began communicating with a young unconscious Mewtwo and started talking to him. Ambertwo and Mewtwo became friends but after only a short time the Squirtletwo, Bulbasaurtwo and Charmandertwo disappeared as they had perished in the real world. Mewtwo was confused to what happened but his confusion turned into sadness when Ambertwo disappeared as well as what remained of her consciousness faded away in the real world. Just before Ambertwo disappeared, she thanks Mewtwo for caring about her and told him “life is wonderful”.

Later in the Movie Mewtwo Strikes Back, it was seen that Mewtwo had a Charizard, Blastoise, and Venusaur which had similar patterns of the Charmander, Squirtle, and Bulbasaur which had vanished along with Amber. This is to be belived as an act of resemblance and memories of what happened when Amber had been alive, showing that he does have some recollection to their relationship. 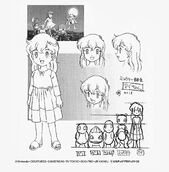 Concept art
Add a photo to this gallery
Retrieved from "https://pokemon.fandom.com/wiki/Amber_Fuji?oldid=1163380"
Community content is available under CC-BY-SA unless otherwise noted.