Amber is a character appearing in Pokémon Adventures, who was an admin of Team Aqua.

Amber is a tall, bald man.

Blaise wears a white T-shirt under his sleeveless pocketed jacket, with black shoulders. He also wears some long pants and shoes. Sometimes, Amber wears a cap.

After obtaining Archie's Key Stone and his Sharpedo, Amber wears the outfit from Ruby & Sapphire arc, only that he wears Archie's amulet.

He, Shelly and Matt were ordered by Archie to kidnap the president of the Devon Corporation. They did this by getting his Castform stuck in the pipe system of a fountain, intending to pose as repairmen. Sapphire unintentionally foiled them by rescuing Castform for the President, causing them to decide to go through with force.[1] They had their Pokémon steal a machine part from the Devon President and flee into Petalburg Woods. Sapphire, with the injured President on her back, gave pursuit with Gabby and Ty. Amidst the woods, she found as her enemy were doing something amidst a bush that served as a Secret Base. Sapphire confronted the Team Aqua members in battle, whose Ludicolo attacked Aron, Rono. Amber contacted their boss, reporting the component was in their hands, but was ordered to finish loose ends by defeating Sapphire and the reports. Upon realizing that she couldn't win, Sapphire was lent Castform's help. Her Torchic, Chic, used the power of intense sun to burn Ludicolo. The enemy was impressed, though Sapphire ran off with the reports and Mr. Stone.[2] The encounter motivated Sapphire to grow stronger.[3]

Archie promoted Amber, Shelly and Matt to admins. He told them that since Gabby, Ty and Sapphire had seen their faces, they must be eliminated.[4] Captain Stern was reported about the encounter from the reporters, Gabby and Ty. Stern was in shock, since Mr. Stone carried an important component for the submarine, which was stolen by Team Aqua.[5] Gabby and Ty, who spoke with Captain Stern, realized the men they faced and the person Captain Stern faced were of two different organizations.[6]

Overhearing that Flannery knows something about Sapphire, Amber and Shelly kidnapped her.[7] He then went to Mt. Chimney to oversee a crucial operation. Amber called Shelly to confirm that her mission was going smoothly.[8] Angie brought Professor Cozmo and his Meteorite, but before they can put it into Team Aqua's machine, the cable car arrived with Matt's unconscious body. Amber told Cozmo that Team Aqua had cruel enemies, who were attempting to stop their noble work, claiming that Matt had been "negotiating" with the enemy. Amber took off his Pelipper to defend Team Aqua, confronting Flannery and Sapphire, who were on Sapphire's Tropius, Troppy. He admitted he feigned incompetence at battle in order to continue his "good guy" ruse with Professor Cozmo inspiring Cozmo to put the Meteorite in the machine and thus kill Mt. Chimney.[9] Directly after killing Mt. Chimney, Amber jumped off Pelipper and approached the machine, marveling at its power, and then sent out his Carvanha, who dug out a hole.[10] Team Aqua then fled underground into a dark hollow created by Secret Power. They were followed by Sapphire but successfully threw her off.[11]

Amber let Matt lean on him when Ark asked Archie if he could accompany them to the Seafloor Cavern. Amber watched as Archie's Walrein cruelly attacked him; Archie turned him down, and Amber went with some Team Aqua grunts in the submarine.[14] They came to the Seafloor Cavern, where Team Aqua and Magma split from each other. In one of the caves, Amber, Archie and the grunts were thrilled to have found Kyogre.[15] Amber's Pelipper hit Kyogre and awakened it, which thrilled Archie and Amber.[16]

Archie sent Amber to spy on Team Magma and find out why Kyogre wasn't spreading its power like it should. Amber found out about the Red and Blue Orbs and attacked Tabitha for the Blue Orb. He follows Tabitha into the submarine and physically restrains him while his Volbeat used Trick to steal the Orb. Volbeat brought the Orb to Archie. When Amber asked Archie for help in holding Tabitha back, Archie removed the key component of the submarine and sent them into the sea on auto pilot, guaranteeing their deaths because (without the component) the submarine would buckle under deep sea pressure.[17] Knowing death could be imminent, Tabitha and Amber immediately began to work together. The submarine started to break, springing leaks everywhere that they tried to plug. A burst of water flooded the submarine and Amber passed out; while he was unconscious, Tabitha grabbed his hand and swam to the surface, saving him.[18]

Amber woke up on the floating wreckage of the submarine. Believing that he must have misunderstood Archie, he convinced himself to remain loyal and he flew off on Pelipper to support Team Aqua.[19]

He went to Route 108 to help Shelly and Matt protect Kyogre from Wattson, Flannery, and Winona. Amber emerged from the sea and faced Wattson.[20] He fights Wattson, whose Manectric knocked out Pelipper, Amber's only Pokémon left. Angie lent him her Nincada, who evolved during Amber's fight against Wattson. Because of its speed, Ninjask seemed to have the upper hand against Manectric, but Manectric took out Ninjask out with Thunder before fainting. Amber then has the unsuspecting Wattson knock out from behind by Shedinja, causing him to fall backwards into the water.[21] After Shelly retreated and Matt fell in the ocean, Amber was hiding and overheard Winona, Flannery and Wattson talking about going to Team Aqua headquarters.[22]

The battles between Gym Leaders and Team Aqua and Magma admins were reported to Norman.[23]

Maxie and Archie picked up the Red and Blue Orbs and intended on betraying their subordinates and crush them, including any authority to rule the world.[24]

One day, Amber arrived to Team Aqua's headquarters. He thought of Shelly and Matt, his teammates he served Team Aqua with. He did recall his own leader betrayed them, but so did Amber. Just then, Matt and Shelly appeared, which made Amber really happy. However, he suspected it was an illusion and had Gorebyss extinguish the flames. Amber knew it was Blaise from Team Magma, whose specialty was creating illusions from flames. Blaise came to Amber and proposed to work together.[25] Amber refused to work with Blaise, thinking it'd be a low point in his life to join a Team Magma member. Blaise wondered if Amber could force him out, but noticed the water was rippling unnaturally. Behind his back, Blaise and Slugma got hit by Gorebyss' Hydro Pump. Blaise was impressed by Amber's skill, seeing he was quite powerful. Amber refused to ally himself with Blaise, who showed the Scanner that pointed the location of Red and Blue Orbs. Amber was thrilled and was told Blaise used the Scanner to find the Red and Blue Orbs four years ago. Blaise told him that he found the Orbs, which reverted into shards, but were taken by Team Rocket. He suspected either Team Rocket, an unknown person or even Maxie and Archie could have the Orbs. Amber wanted to see more, but since Blaise forced him to join, Amber did so. Though he wasn't glad he had to ally with Blaise, Amber was still thrilled Team Aqua could be reformed. Blaise thought Amber was a fool, since Blaise wanted to take control of Kyogre and Groudon, and even empower them with an old strength.[26]

Amber and Blaise noticed Hoopa on the ship, where Ruby, Emerald and others were. Knowing it could create portal rings, Amber and Blaise made a plan.[27] During the night, Blaise and Amber started their plan. Amber's Gorebyss managed to hit Hoopa from far away, which infuriated Hoopa. Hoopa created a portal ring and saw Amber and Blaise, though Gorebyss kept attacking. Hoopa was and just as it went to summon something, Slugma emitted fire. Hoopa was overwhelmed by the flames and saw an illusion of Kyogre and Groudon, which Hoopa summoned through the portal.[28]

Amber and Blaise were glad their plan worked and saw someone was returning the Red and Blue Orbs to Hoenn. Ruby and Emerald discovered Amber and Blaise provoked Hoopa and sent Dusclops and Milotic to battle their Gorebyss and Slugma. Milotic and Dusclops were injured, while Slugma used the flames to overwhelm Emerald and Ruby with illusions of a terrifying Pokémon beyond the rings. As Amber sailed on Gorebyss, Blaise flew on Swellow and planned to attack whoever held the Orbs. Just as they arrived, they saw two men, who had the marks of Team Aqua and Magma. While the two were former leaders, Maxie and Archie, Amber and Blaise were surprised, since they had different appearances.[29] Amber and Blaise were surprised at the two men, who were glad Groudon and Kyogre have returned to them. Blaise and Amber wondered about Sharpedo and Camerupt, who Mega Evolved, since they never saw them in those forms. Maxie and Archie were displeased neither Blaise nor Amber learned anything since Team Aqua and Magma were disbanded. Blaise and Amber were even more shocked the two men knew their names, though Archie asked why they summoned the Legendary Pokémon. Amber claimed it was to restore Team Aqua, though Blaise didn't want to reveal anything to them. Blaise tried to shush Amber, though Maxie was glad those two brought Kyogre and Groudon to them. Thus, Amber and Blaise watched as Maxie and Archie battled Red and Green.[30]

Eventually, Amber, Blaise, Green and Red were taken to Giovanni's airship. When Red woke up, Blaise told them they were approached by a man, who took all their gear. Amber noted they were also flying on an airship. The group was approached by Giovanni, who stated he wanted to save the planet as well.[31] They were shown Primal Groudon and Primal Kyogre, who tried to crush the meteorite. Blaise wasn't glad about Maxie fighting a common goal, since he did say they wanted to cover the world with magma. Amber reminded him he needed a planet to do that, but Blaise stated he doesn't wish the world to be crushed by the meteorite, either. They watched as the meteorite was destroyed, but noticed Maxie and Archie were wounded. They descended down on Blaise's Swellow and approached the bosses, who were turning into dust. Maxie and Archie explained they returned to the world to help fight the meteorite. Before they disappeared, Maxie and Archie asked of Amber and Blaise to protect the world. After the bosses turned to dust, Amber and Blaise screamed and cried at their deaths.[32]

Amber took Archie's chain and Sharpedo, while Blaise took Maxie's glasses and Camerupt, then came with Giovanni, Red and Green. They faced Ruby, Sapphire, Emerald and their friends, showing them they could Mega Evolve their new Pokémon, too, while Giovanni noted the Mega Evolution could be used only in battle, stating the meteorite was actually a Pokémon.[33]

After taking the position, per Steven's orders, Amber launched an attack, which merged with others' attacks and shattered the meteorite. In the end, Amber watched as Ruby, Sapphire and Rayquaza flew back to Sootopolis City.[34] 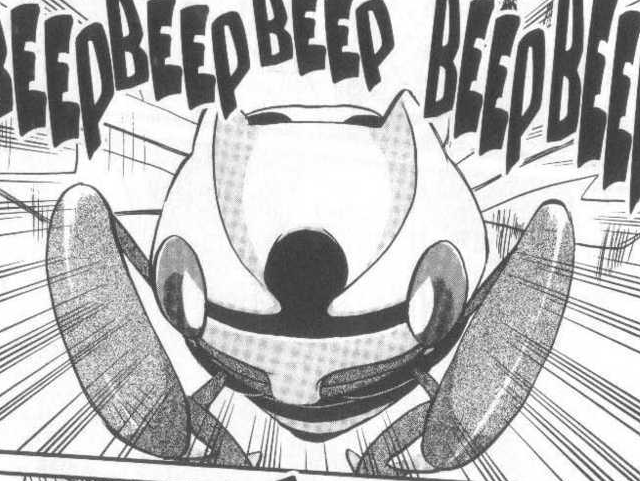 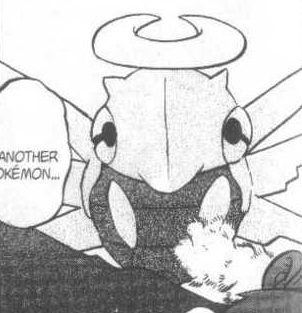 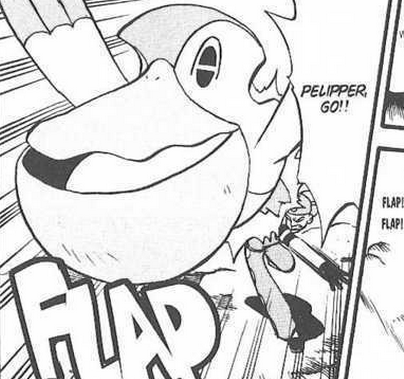 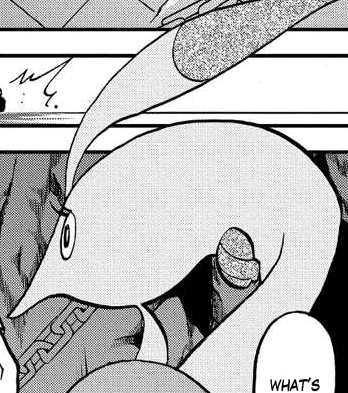 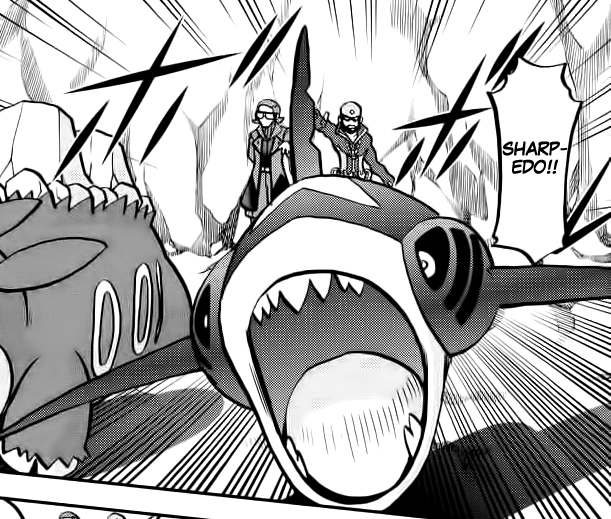 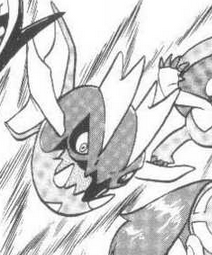 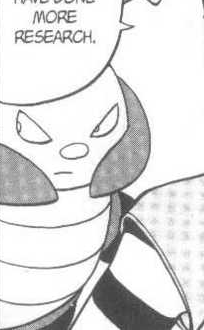 Amber's appearance in the Ruby & Sapphire arc.
Add a photo to this gallery

Retrieved from "https://pokemon.fandom.com/wiki/Amber_(Hoenn)?oldid=1240843"
Community content is available under CC-BY-SA unless otherwise noted.