Amaura (アマルス, Amarusu) is a Rock-Ice-type Fossil Pokémon introduced in Generation VI. It can be revived from the Sail Fossil. It is Tyrunt's counterpart.

In the Pokémon movie "Volcanion and the Mechanical Marvel", there is an Amaura living on the plateau that Ash and the others save from a Pokémon hunter.

Amura resemble a sauropod dinosaur, possibly Amargasaurus due to it being speculated it had frills. Its frills also resemble auroras and may reference the aurora borealis (referencing its Ice type on how Aurora Borealis often appears in snowy biomes).

Amaura comes from Amargasaurus and aurora. 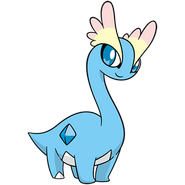 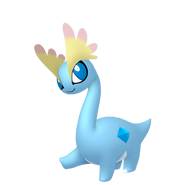 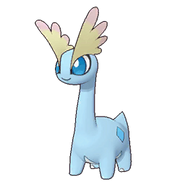 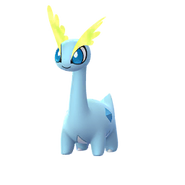