Altaria evolves from Swablu starting at level 35. It can further evolve into Mega Altaria using its Mega Stone.

Altaria first appears in Sky High Gym Battle as one of Winona's Pokémon that she uses in battle against Ash Ketchum.

Another Altaria owned by Drake appears in Vanity Affair where it battles against Ash's Grovyle. In Last Call, First Round!, one appeared where it was owned by Nando.

It makes minor appearances in Jirachi: Wish Maker where it is seen as one of the Pokémon that lives in Forina. A Swablu was injured and belonged to a flock of Altaria in True Blue Swablu. It appeared again in Lucario and the Mystery of Mew in a flock with many Swablu. In Pokémon Ranger - Deoxys Crisis, a flock an Altaria appeared and the Altaria went mad and Solana caught one to snap the mad Altaria out of their haywireness. An Altaria was seen in A Meteoric Rise to Excellence! where Wilma was training it.

Its name is a mix between alto, meaning high, and aria, which is a song or part of a song that is written for only one singer. It may also come from Altair, a star whose name means "The one who flies". 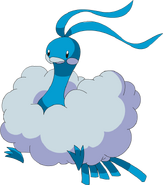 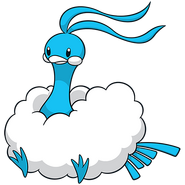 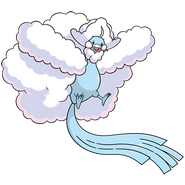