The Alola Starter Pokémon can be picked out of three Pokémon that new trainers will obtain in their journey which cannot be found in the Alola Region itself. The three starter Pokémon are Rowlet the Grass/Flying Pokémon, Litten the Fire Pokémon and Popplio the Water Pokémon.

In Pokémon Sun and Moon and Pokémon Ultra Sun and Ultra Moon, after returning from Mahalo Trail and arrive back in Iki Town, the Kahuna of Melemele Island, Hala/Professor Kukui, will offer the Starter Pokémon to choose from. A ceremony will occur after choosing the first Pokémon. Hau will always have the Pokémon that is the weakest to the chosen starter.

The player character's choice will also influence other battles in the game.

In Pokémon Sword and Shield The Isle of Armor Expansion Pass, after collecting 100 Alolan Diglett, Diglett's Trainer will give the player the Alolan starter that corresponds to the same type of the Galar starter the player chose. 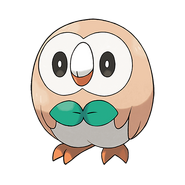 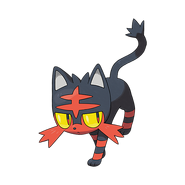 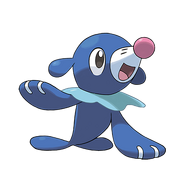 Popplio the water Pokémon
Add a photo to this gallery

Professor Kukui's Litten
Add a photo to this gallery
Retrieved from "https://pokemon.fandom.com/wiki/Alola_Starter_Pokémon?oldid=1389208"
Community content is available under CC-BY-SA unless otherwise noted.