Allister is a Gym Leader in the Galar region, who specializes in ghost-type Pokémon. He only appears in Pokémon Shield - in Pokémon Sword, the Gym Leader Bea takes his place.

Allister is a young boy with pale skin and purple eyes. His black hair is fairly short, but with a few long strands in the front and a long curved cowlick at the back. On his face is a white mask with large holes for his eyes and mouth with motifs that looks similar to Corsola's motifs on the sides. His outfit consists of a long-sleeved black shirt and shorts. Around the ends of the sleeves are rings of light purple— a pair on each one, and on the right sleeve is the Galar league symbol. His shirt has a purple and gold upside-down triangle on the front with a black and gold spirit-like shape in the middle. This same symbol also re-appears on his right pant leg. Around the neck of the shirt are two light purple collar folds. His shorts and shirt share a light purple dot-like pattern, and on the left pant leg are two symbols — the numbers "291" and green Xs. Extending from Allister's upper waist to his shoulders are two white suspenders, reuniting behind him in a Cursola's face intersection and on his left hand is a purple glove with black fingertips. On his feet are white and black shoes with ruffles on the top.

In spite of being entitled as a Gym Leader at his young age, Allister is exceedingly introverted, shy, soft-spoken and bashful, hence always wearing a mask to conceal his face when he's around other people. He prefers spending his time alone in ruins and cemeteries, rather than making public appearances. 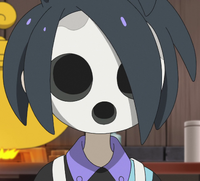 Allister in Pokémon the Series (anime) 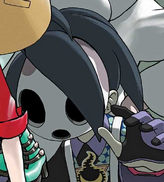 As an opponent, Allister can team up with Milo, Melony or Mustard.