Aliana in other languages

Aliana is a character that appears in X and Y and is one of the five scientists working for Team Flare.

Aliana compared to the other female scientist (Bryony, Mable, and Celosia) has a narcissistic and mature personality. When Aliana first encounters the player character, she begins to belittle their knowledge. However, in future encounters, Aliana's interest in the player character's ability as a trainer is apparent. 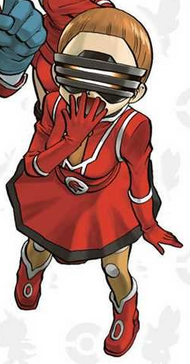