For the variant appearing in the games, see Alexa (Kalos).

パンジー Panjii
Alexa
Alexa is a character appearing in Pokémon Adventures, who is a journalist.

Alexa is a slender young woman with fair skin and green eyes. Her light brown hair is mostly collected, though a few curly tufts protrude from her head. Clothing-wise, Alexa wears a very fashionable outfit that shows off her slender frame. It consists of a tight black and red shirt with a white collar and medium-length sleeves with white cuffs, along with skin-tight gray pants, a huge brown and silver belt, and very long brown boots with gray buckles. She also wears two yellow earrings and paints her nails red to express herself. Additionally, since Alexa is a journalist, she sometimes wears a headset composed of a microphone on her left side and a camera on her right. She also stores her Poké Balls in a fanny pack that she keeps around her waist.

A determined journalist, Alexa is ready to go into danger for a story. However, she sometimes neglects her Helioptile, even if she does not want to, for she cares much about it.

The name Alexa could come from "Allexis", a genus of plants. The Allexis genus is also related to the Viola genus of plants, which could be a reference to Alexa's relation to Viola.

Her Japanese name, Pansy, is literally "pansy", a flowering plant.

Alexa first appeared with Viola near X's house. They wanted to interview Y because of her skills as a Sky Trainer. Y however disliked them because journalists are the reason why X didn't want to leave his house.[1] Both Alexa and Viola saw the rampage between Xerneas and Yveltal and Alexa mentioned that there is a legend that Xerneas and Yveltal appear every 1000 years.[2] Once Viola approached the group in Santalune City, Y remembered this was the photographer, along with Alexa, who appeared in Vaniville Town before the incident happened.[3]

Alexa, later on, was finishing her article about Vaniville Town, pleased nobody had actually written about the report. She was called by her sister, Viola, who asked Alexa to find the children they saw in Vaniville Town and protect them, for they are in danger. Alexa promised and saw her Helioptile was charging its energy on the sun. Alexa apologized to Helioptile, promising to go for a walk with it, since she needed to interview Professor Sycamore in the Prism Tower first. As she walked into the tower, she noticed many electric-type Pokémon powering the tower, remembering there was even a blackout in Lumiose City recently. As she arrived to the top, Alexa noticed Professor Sycamore, who was leaving, since he has been interviewed by Alexa's boss, the editor-in-chief. The editor claimed he knew about Alexa's "sources" and destroyed her report on Vaniville Town. He told Alexa he cannot have the information about ancient Pokémon and an organization in Kalos be leaked, then sent his Pokémon to attack Alexa. Fortunately for Alexa, the children arrived and X started the battle with the chief-in-editor. However, Alexa noticed her Helioptile was taken by the editor. X promised to retrieve Helioptile, making Alexa devastated, since she promised Viola to protect the children. Alexa realized someone in the charge of the media did not want the information about Vaniville Town's attack be published to the public.[4]

Alexa was glad X fought the editor-in-chief and retrieved her Helioptile. After the incident, Alexa left in a cab, promising to visit her sister in Santalune City.[5] Seeing Mable talking with the reporter, Malva, Y remembered Alexa mentioning someone had infiltrated the media to prevent anyone from learning about the incident in Vaniville Town. Y sensed that person was Malva.[6] The group remembered Alexa and her Helioptile, as Alexa was the one that gave them the article about Xerneas and Yveltal. The article was read by Y, who managed to memorize it.[7]

Alexa told Viola about the Ultimate Weapon, which had the power to absorb the Pokémon's life energy to shoot out the beam. Viola recalled a folklore that the Ultimate Weapon, referred to as "the evil flower" hurt Pokémon and humans, while Alexa had a bad feelinga about it. They saw Lysandre's broadcast, who claimed he'd purify Kalos of the unwanted ones. Thus, assisted by Clemont, Bonnie and Yvette, Alexa and Viola destroyed Team Flare's defenses and went to destroy the stones at the Menhir Trail.[8] Alexa assisted the group in destroying the columns, which prevented Team Flare from using the Ultimate Weapon. She was also amazed by the circle the Sky Trainers' Vivillion formed with Hold Hands.[9] In the end, Alexa came with Professor Sycamore to congratulate the group of Vaniville Town for defeating Team Flare.[10] 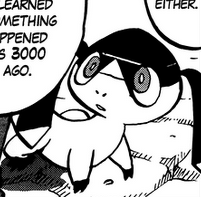 Retrieved from "https://pokemon.fandom.com/wiki/Alexa_(Adventures)?oldid=1424285"
Community content is available under CC-BY-SA unless otherwise noted.