For the variant appearing in the games, see Alder.

Alder is a character appearing in Pokémon Adventures, who was the Champion of the Unova region.

This section, or a part of it, has been transcluded from Alder; any changes involving it should be made there instead. /

Alder is an enthusiastic (former) Champion, who does a lot of dangerous stunts. However, to him, he was on a spiritual journey, to discover one self, after his beloved Pokémon passed away. His worries were increased when he listened to Team Plasma's propaganda about releasing Pokémon.

He passes his wisdom to other people, who, in return, recognize Alder as their friend and mentor. Since N defeated him, Alder stepped down as the Champion to let someone young take his role. However, he decided to lend his power to stop Team Plasma, due to their villainous acts of freezing Unova cities and "liberating" Pokémon.

A long time ago, Alder had a Pokémon, which died from an illness.[1]

Iris wanted to become the Champion, so Drayden, her newest mentor, took her to see Alder, who was wrestling his Bouffalant. Alder assumed Iris wanted to battle him, to which she denied, as she didn't know why Drayden even brought her to him. Drayden shushed her, since she lacked manners. Iris asked how would she even call them, to which Alder and Drayden stated she could call them "gramps". Iris thought it was confusing to call two people with the same nickname, so they corrected it. Iris felt the negativity inside her being released, as she saw these two people started to respect her as an equal.[2] Alder motivated Iris to be a Dragon-type trainer. Iris also learned from him to respect her spiritual side, and referred to Alder as "gramps" out of respect.[3]

When Team Plasma rose up, they spread propaganda about people mistreating their Pokémon. They declared that even Alder, the Champion, mistreated his Pokémon, which passed away. Alder was devastated by these words, which made him question himself whether what Team Plasma said was the truth, and whether liberating Pokémon was a good idea.[1]

Black fantasized about confronting the Elite Four, and even Alder, the Champion, to win the Unova Pokémon League.[4]

Alder urgently sailed on his Bouffalant on water.[5] Alder met up with Marshal, who referred to him as his master, near Nimbasa City. The next day, the two of them had a battle in the Battle Subway.[6] Mienshao bound Accelgor and threw it to the ceiling. However, Marshal surrendered, for Alder utilized Accelgor's Acid Spray, which could've defeated Marshal's Mienshao. Alder teased Marshal about this being 1075th victory against Marshal, who won two battles. Complaining about the mayor's tardiness, Alder left to wander around outside, where he wrestled his Bouffalant. He lost, but laughed, stating he was getting old. Soon, wild Pokémon approached Alder, as they were interested in his gentle, yet playful soul. Alder unintentionally forced the mayor to meet with Marshal instead of him.[7]

He delayed for an entire day, and when he returned to the Battle Subway, Alder was surprised that the mayor was not there. He complained that the mayor was impatient and was surprised again when Marshal told him that, as an ordinary trainer, White would be testing the Battle Subway. He heard White and Black whispering about his irresponsibility and claimed that they were being harsh, though he then laughed good-naturedly, admitting that he couldn't argue with the truth. He told them that he was not "playing" around, but was on a spiritual journey. He asked White why she wanted to challenge the Battle Subway so badly; White gave him a long, touching speech. His response was, besides staring blankly, to whisper to Black that her story was much better than his; meaning her reasons for challenging the Subway were better than his "spiritual journey".[8] Meanwhile, N was planning on defeating Alder, the Champion, which was the goal that Black had in mind, too.[9]

Alder was with Marshal, who reminded him to return to the Pokémon League, due to the tournament's opening. Alder refused, and reminded that he counted on Marshal and the rest of the Elite Four. In fact, Alder wanted to step down as a Champion and retire. Marshal wanted him to at least reconsider choose his successor, but Alder simply glared at him. Alder went atop of a cliff, and spotted N nearby. He and Marshal went to N, who was speaking about the legend of the heroes of Truth and Ideals. Alder knew that legend, and remarked that Zekrom represented the Ideals from that story. N saw Alder was the Champion, and called him and the Pokémon League as stupid. Marshal was annoyed at N for insulting Alder, who calmed Marshal down and smiled. Instead, Alder had a Double Battle against N, using Escavalier and Bouffalant against his Archeops and Darmanitan. When Alder had Bouffalant use Head Charge, N frowned, as Alder didn't consider his Pokémon's feelings when using that recoil move. Alder stated his Bouffalant trusted him, and its thick fur absorbed the recoil damage. As Alder defeated Darmanitan, he asked N about the disappearances of the Gym Leaders, as well as whether N was part of Team Plasma. N confirmed that he was the king of their organization. Moreover, he declared himself as a hero, as Zekrom had chosen him as the bearer of Ideals. A moment later, Black, White and Iris found Alder defeated on the battlefield.[10]

The kids slid down to go to Alder, who stated he was merely injured by Zorua. He commented if he was not so old, he could've dodged the attack. Still, he went on to continue the battle. His Accelgor used Acid Spray to defeat N's Archeops, defeating it. Alder suspected that N would send Zekrom as his final Pokémon, which shocked Black: the Light Stone reacted, sending Reshiram out. Despite this, Alder told Black he didn't need help, even if he was losing. N sent Gigi and Zorua to battle, to which Alder had Accelgor focus its attacks on Gigi. However, Zorua shapechanged into Tepig and took the hit, while Accelgor got badly hit by Gigi's attack. Accelgor went to stand up when it saw Alder, but it was actually Zorua, who maliciously shapechanged into its original form. With Accelgor fainted, Alder lost the battle.[3] Despite this, Alder didn't really try to win this battle, having on his mind what Team Plasma said about him. Feeling that he failed the Pokémon, for failing to understand it, he decided to step down as the Champion.[1] With N having disappeared, Alder decided to retire, and have Marshal and the rest of the Elite Four handle the opening of the Pokémon League.[11] Iris, however, decided to participate in the Pokémon League to get revenge on N for hurting her gramps, Alder, for disrespectfully attacking him.[2]

Later, N approached Alder, whom Iris tried to protect. N didn't mean any ill intent, while Alder explained that when they fought, he didn't think that it would be good for his Pokémon to battle someone that could hear their voices. Alder confessed there was a time he even thought Team Plasma liberating Pokémon was a good idea. While others were shocked by this response, N understood that Alder understood Pokémon without having the ability to hear their voices. The two men corrected each other's prejudices, and found respect for each other.[1] Since the disastrous end of the Pokémon League, Gorm, Alder, Benga, N and Iris were training at Whitehollow Forest.[12]

Drayden informed Bianca and Cheren that Alder retired from being the Champion, since Alder wished to pass on the title to younger generations.[13] Iris went with Alder and Team Plasma sage, Gorm, through the White Forest. Their Pokémon crushed through a path, which made Iris pleased that the gramps was here to show them the path, else she would've been lost at the White Treehollow. Alder warned her that her Champion dress was getting dirty, and asked her which gramps did she mean. Iris applauded Gorm and his Cofagrigus, to which Alder became sad that Iris had no compliment about him, but Iris stated it all depended what would Alder do next. Thus, Alder resolved himself as the Champion to fix the mistakes that have been made at the Pokémon League two years ago, and Iris saw that's Alder that she knew.[14]

Alder used Bouffalant to battle Ghetsis and his Pokémon at the Plasma Frigate. Ghetsis later disappeared, leaving Alder and Bouffalant to wait. Looker and Croagunk fell onto the Plasma Frigate, where they joined Alder. The two also encountered N and Whitley, and everyone was astranged when N referred to Alder as "gramps". Despite this, Alder told the two about Looker's identity as an International Police officer, despite the latter's protest. Suddenly, the group stopped, as Gigi found a secret entrance; N pressed a button, revealing a secret room where Ghetsis was located, which contained all of Team Plasma's "liberated" Pokémon. Ghetsis, refusing to turn himself in, creates an explosion on the Frigate. Alder withstood the attack, and held a beam as not to crush Whitley, who was briefly unconscious. Alder was nevertheless concerned about her, but Whitley stated she was fine.

The two rejoined Looker and Croagunk, and they saw N attempting to rescue Ghetsis from falling down the flying ship. They were shocked when the former slammed his son with his cane. After N let Ghetsis drop down from the sky, Hugh visited the group. As Foongy healed N, Hugh realized Alder was the Champion, who was also involved in the fight. Iris, Black and White arrived on Reshiram, to which Alder and Whitley joined them to fly off the Plasma Frigate, whereas Hugh was carried by his Vibrava. Near the castle, Alder met up with Benga. Alder was glad, seeing his grandson having new friends, to which Hugh was surprised that Alder was Benga's grandfather. Since the Plasma Frigate was slammed into N's Castle, after the fire it produced was doused, Alder joined N, who returned the first "liberated" Pokémon: Hugh's sister's Purrloin.[15] In the end, Alder sat on the bench with Black, White, Iris, Bianca, Roxie and Hugh's sister, watching the graduation ceremony of the students of Aspertia City's school.[1] 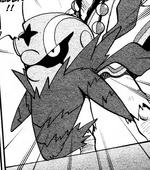