Alder in other languages

Alder is the Champion of the Unova region in Black and White, succeeded by Iris in Black 2 and White 2.

Alder is a solitary wanderer who travels across the Unova region to ease the pain of his sorrow over the loss of his beloved Pokémon partner, which became very ill and passed away. Alder takes his role as a Champion very seriously, and strives to teach trainers how important it is not to be prideful or power-hungry. He is a wise older person with much life-experience, and is also kind but passionate at the same time.

Alder is first met by the player character outside Nimbasa City when he catches sight of Elesa. After Cheren says he seeks to become Champion to gain strength, Alder decides to have him and the player character have a Pokémon battle with two Preschoolers to show him their battle styles. After which, Alder is surprised his words have not swayed Cheren's heart and proceeds to enjoy the rest of the festival he is attending. Much later, after N gains control of Reshiram/Zekrom, Alder appears and N informs him about his plans to change the world along with a reminder why he is traveling around the Unova region. Following N's tip on where to find the Dark stone/Light Stone, Alder meets up with the player character in the Relic Castle, only to encounter Ghetsis. Sadly, the stone is not in the ruins and there is little time until N reaches the Pokémon league and earns the right to challenge Alder.

However, to brighten things up, Lenora calls and reveals that the stone in the museum is actually the Dark Stone/Light Stone that holds the essence of Zekrom/Reshiram. Having faith in the player character being the second Hero, Alder leaves the Stone in the player character's hands and returns to the Pokémon League to face N. However, Alder loses to N as his heart has not yet healed from the loss of his Pokémon. After Team Plasma's castle engulfs the Pokémon League, Alder lets the player character go in his place to face N and stop him from separating Pokémon from humans. After N's defeat, Alder arrives with Cheren and takes Ghetsis away to be arrested. However, the Shadow Triad manage to free Ghetsis, where he goes into hiding.

The player character first meets Alder in Floccesy Town, where he resides. He doesn't have much of a role in this game, unlike his role in the predecessor. But, when the game is completed, one may go back to Floccesy Town and he will ask to battle with him. Instead of using Bug-type Pokémon, he uses a mix of Pokémon (he still has his Volcarona though). Once the player character defeats him, his grandson, Benga; will come rushing in, stating that he has completed the Black Tower/White Tree Hollow challenge. 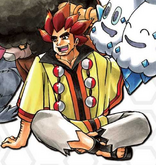 Alder's VS Sprite in Black & White