Aipom resembles a purple squirrel monkey with its face forever frozen in a maniacal grin similar to that of the cymbal banging monkey toy that can be described in a rictus and a blank stare from its round eyes. On its thin tail is that is a three fingered hand-like dexterous appendage. It provides both propulsion and balance while Aipom leaps from tree to tree. Its face, belly, feet, and hand-like appendage on its tail are cream colored, and it has a cowlick.

Female Aipom have longer head hair than the males. This also works with its evolution Ambipom.

Aipom is a type of monkey that spends most of its time in the trees. It uses its tail to swing from tree to tree, picking fruit, and handling other objects. Because its tail gets so much more use, its hands are less dexterous a result. It is also very mischievous, and it steals items from passersby simply to annoy them.

In Alola, it's notable that Aipom loves eating Bounsweet.

Aipom evolves into Ambipom by leveling up while knowing the move Double Hit.

When Ash's hat was taken away by the tail of a wild Aipom, Ash started to chase the Aipom. Aipom is a very cheeky Pokémon, just like a monkey. Aipom likes to take Ash's cap, which makes Ash very annoyed. When Aipom got experienced in the Pokémon Contest as an audience, and it got inspired by it. Sometimes when Ash uses Aipom, Aipom will use his power like in a contest, for example, the move Swift.

When Ash decided to leave his home in Kanto and board the ship to Sinnoh, he originally wanted to take only Pikachu with him. But Aipom tagged along and then traveled to Sinnoh with him.

When Ash is training his Aipom together with Dawn's Buizel, Aipom is distracted by the Buizel's move and gets inspired by the move. On the other hand, Buizel wanted to get stronger, in a way other than competing in a contest. After talking to Zoey, Ash and Dawn decided to trade Aipom and Buizel. Now, Dawn has an Aipom, which has already evolved into an Ambipom.

Aipom appears to be based on a monkey, and its tail bearing the resemblance of a hand.

Its name could possibly be a combination of the words ape and palm, referring to its hand-like tail. 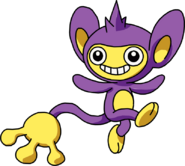 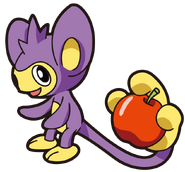 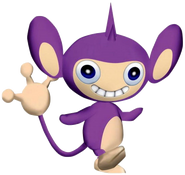 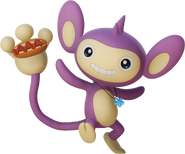 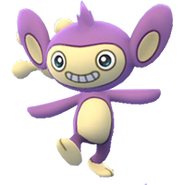 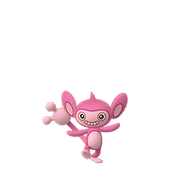