For the variant appearing in the games, see Agatha.

Agatha is a character appearing in Pokémon Adventures, who was a member of the Elite Four in the Kanto region.

Agatha is an old woman, who has short yellow hair. She wears a white apron and is supported by a brown cane. Agatha wears a long violet sleeveless dress and black shoes. She also wears a white shirt.

Agatha has a cruel personality, and believes that Pokémon and humans will never be able to live with one another. She bears a grudge against Professor Oak for leaving her research group, extending this deep hatred to his grandson, Blue. Agatha is only kind to those whom she believes shares her beliefs, as shown when she saved Lorelei's Seel from succumbing to the toxic waste produced by a factory. She also controls Bruno, which forces him to become a member of the Elite Four against his will.

Agatha was a friend of the Daycare couple, Professor Oak, Kurt[1] and Pryce. One day, Pryce's two Lapras were killed in an accident, which made Pryce depressed and distance himself from others. His friends, including Agatha, composed a song to cheer him up.[2]

Agatha observed Professor Oak's battle at the Pokémon Championship, congratulating him on his victory afterwards. Oak walked over to her, as Agatha asked him why did he quit the research team. He revealed that the research team was merely conducting experiments to make the Pokémon do their bidding, prompting Agatha to release her Gastly and Gengar. In response, Oak released his Kangaskhan and Chansey, as the two begin to fight. Whilst Gengar and Kangaskhan grappled, Agatha asks what would he accomplish by himself, to which Oak revealed that his dream was to create a Pokémon Encyclopedia. Agatha refuted the idea, stating that he would not live to see the completion of such a project. Oak agreed, explaining to Agatha that it would be a job then for his descendants to complete. As Oak left her presence, Agatha called out to him. Later, Agatha won the right to fight against Oak in the Pokémon Championship, and after an 8-hour long battle, Professor Oak was declared the victor.[3]

Later, Agatha appeared before a young Lorelei at the base of an industrial factory. She used her Gastly to heal Lorelei's sick Seel, and comments upon the depravity of humankind. Seeing that Lorelei also hated humans because of that, Agatha proposed the two could like to become partners.[4]

Agatha was at the power plant for a mission of hers.[5] She appeared before Blue and Evan at the abandoned power plant and tried to scare them off. When Evan accidentally told Blue was Oak's grandson, she attempted to take revenge for the events at the Indigo League by targeting his grandson. She had her Gengar use Hypnosis on Blue, then his life force away with Dream Eater.[6] Evan accused her of stealing her Haunter; Agatha denied that, as Haunter was drawn to the toxic gas around the power plant. Blue had Evan distract Agatha, who sent Arbok and Golbat to attack. Evan managed to take his Haunter back and attack Agatha's Gengar with it. However, Blue broke free and had his Scyther slash Agatha's Gengar and Gastly. Agatha commended Blue's abilities, proclaiming that he truly was Professor Oak's grandson. Blue wanted to know what grudge Agatha had against his grandfather, but Agatha disappeared.[7]

Professor Oak, who defeated Green in his battle against her at the Indigo Plateau, recalled his previous battle, in which he defeated Agatha and won the Champion title.[8]

Agatha and the rest of the Kanto Elite Four watched the final battle between Red and Blue at the Indigo Plateau.[9]

Agatha was searching among the ruins of Silph Co. There, she found the amplification device Team Rocket used, and smiled for that discovery.[10] Later, whilst Bruno and Red are fighting one another; Lorelei and Agatha eagerly awaited the outcome.[11] While watching the battle, Lorelei recalled her first meeting with Agatha. When Bruno revealed to Red the importance of Pokémon and human connection, Agatha and Lorelei intervened. Agatha doubted Bruno's words, who was under their control, as Agatha proclaimed humans and Pokémon should not co-exist with each other. Agatha showed the amplification device, while Lorelei asked Red where Giovanni was, who held the final badge needed to activate the device.[4] Red did not know where Giovanni was; he refused their proposal to join the Elite Four and tried to escape. However, he was grappled down and he was injured, along with his Saur, Aero and Pika by Agatha's Gastly, Bruno's Hitmonlee and Lorelei's Jynx. Agatha had her Gastly create a mist to make herself and Lorelei disappear, leaving Bruno to finish Red off.[12]

Agatha was watching as Lorelei tried to crush Yellow and Bill with her favorite attack, involving Cloyster and Dewgong.[13] Lorelei failed to capture Yellow, Pika or Bill. Still, she warned Agatha that Yellow had a special ability that allowed him to read Pokémon's thoughts. Since Yellow could sense Pika's thoughts about Red's battle with Bruno, Lorelei proclaimed their target from then on was Yellow, too.[14] Agatha had Miles capture Pika, offering a reward if he was successful.[15] Since Miles failed Agatha was manipulating him before the Gym Leaders and Yellow, in an attempt to prevent him from speaking. However, her Gastly was defeated by Blue, and she retreated.[16] Green contacted Bill, admitting she was the one that saw his and Yellow's battle against Lorelei.[17] Lorelei and Agatha saw as Lance returned and planned his revenge on Yellow for his defeat.[18] Lorelei and Agatha watched as the Pokédex Holders, as well as Team Rocket executives, were coming to Cerise Island, Lance ordered the Elite Four to regroup, but since Bruno was at Mt. Moon, Lance demanded him to come to Cerise Island.[11] The Team Rocket executives, allied by the Pokédex Holders (except Red, who was still missing and replaced by Bill) went to challenge the Elite Four on Cerise Island.[19]

As Blue and Koga wandered into the caves, Koga's Golbat used Supersonic to trace their enemy. Koga noticed a figure and threw his shuriken, but the figure moved away and sent Arbok. Blue noted their enemy was Agatha. Agatha's Arbok leered them, so Koga's Golbat used Haze to nullify the effects. Agatha taunted them that they were too young to stop her, as her Arbok used Rock Slide, making stalactites fall down. Blue rescued Koga's Golbat but dropped some medicine. In addition, he got paralyzed by Agatha's Gengar's Lick. While Blue was facing Agatha's Golbat, Koga battled against Agatha, who claimed a Gym Leader was no match for a member of the Elite Four. Agatha had her Arbok change the pattern on its body, which increased its speed. With a snap of the finger, Agatha had Arbok wrap Koga and change its patten, dealing even more damage to him and his Arbok. Still, Koga had an idea how to defeat Agatha's Arbok.[20]

Koga had his Arbok use Glare, but Agatha's Arbok resisted the effects, then used Body Slam to inflict damage to Koga and Arbok. Agatha had her Arbok bite off Koga's Arbok's tail away. Koga sent Muk to use Poison Gas and Weezing to emit Smog. However, Arbok changed its pattern, resisting the attacks, then defeated Muk and Weezing. Since Blue was still paralyzed, Koga threw a multitude of Shuriken Poké Balls randomly. Agatha mocked Koga's predicament, believing that he was out of ideas. Blue returned with Koga's Golbat, as one of the Poké Balls, in which Koga's Ekans was in, contained Parlyz Heal to cure Blue. Her Arbok's crest pattern was subsequently obscured by Koga's Golbat, whom he told to drink his blood using Leech Life. Unable to see her Arbok's pattern, Agatha had Arbok bind Koga. However, she and her Arbok were defeated by Blue's Golduck's Confusion. With Agatha out of the way, Blue and Koga proceeded to move on further into Cerise Island. Her Arbok tried to use Poison Sting, but Koga evaded its attack.[21] Agatha stood up, and complimented their skills. However, she pointed they would have yet to win while being in her maze. Thus, she wanted to have Professor Oak to admit she was right; nobody would take up on his quest of Pokémon Encyclopedia, as she had her Gengar attack Blue and Koga out of the shadows.[3]

Agatha waited in the shadows, watching her Gengar toy with the two Trainers. However, Blue and Koga managed to defeat it with help from his Arbok's severed tail, as the shadows around Agatha's battleground were diminished by Golbat's Confuse Ray. As Agatha revealed herself to Blue and Koga, she stated that her only option was to escape. But before she did so, she waved the cane, causing spikes to fall on Koga, who protected himself and vanished. Agatha imparted a piece of information to Blue; that only one more Gym Badge was required to activate the amplification device that was Cerise Island. It was why she controlled some of the Pokémon and make them lead an army to ravage cities to find that badge. She also admitted she equipped her Pokémon, and even Bruno, with special bands that allowed her to gain absolute control of them (hence why Bruno had certain headaches). Finally, she also told Blue how they surrounded Red with their Pokémon and attacked him using three different types of Pokémon, something like that Team Rocket tried to do by fusing the three Legendary Pokémon. She then disappeared in a swirl of darkness around her Gastly.[22]

Bruno, who became a member of the Johto Elite Four, remembered his past alliance with Lorelei of the Kanto Elite Four, due to his viewpoints having diverged with hers.[23] 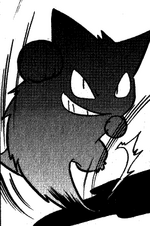 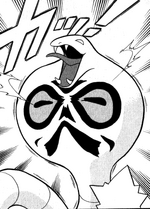 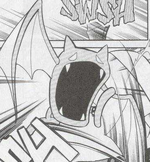 Agatha facing off against Oak in the Pokémon Championships.

Agatha captures Blue with her Gengar.

Agatha defeated by the teamwork of Blue and Koga. 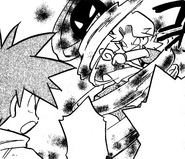