Agatha in other languages

Second
Agatha is a member of the Elite Four in Generation I and its remakes, who uses Ghost-type Pokémon. She was Professor Oak's rival when they were young. She also makes an appearance in the anime, where she battles Ash while she is the temporary Gym Leader until someone could be found.

Agatha is an old woman, who has short yellow hair. She wears a white apron and is supported by a brown cane.

Her outfit in Yellow is the same as it is in Red, Green and Blue.

Professor Oak told Red he learned to accept Pokémon as equals, and when he told Agatha, she told him he was crazy. Oak also tells the player, that after not befriending her Pokémon, she became a "Twisted old Woman, who hated children and never had friends". 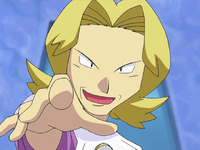 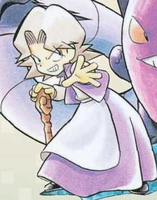 Agatha's VS sprite in Red & Blue

Agatha's VS sprite in Yellow

Agatha's VS sprite in FireRed & LeafGreen