Lusamine
Gladion (Sun and Moon only)

Sun and Moon
The Aether Foundation is an organization based in the Alola region that is dedicated to protecting Pokémon; it is presided over by Lusamine.

Two years before Sun and Moon, Gladion escaped with one of the three Type: Null.

Three months prior to Sun and Moon, Lillie escaped with Cosmog (as shown in the game's intro after choosing your character portrait). Cosmog was really important for the experiment that Lusamine was conducting, and when she noticed, she was angry.

The Aether Foundation is first encountered in Diglett's Tunnel. There they were calming down the Diglett and Dugtrio so trainers could pass. Before going to the Ruins of Life to fight Olivia, Faba and an employee encountered two grunts from Team Skull. They make the player character fight them and Faba invites them to Aether Paradise after completing the Grand Trial.

The Aether Foundation is revealed to have an ulterior motive when Gladion takes the player character there after Lillie had been taken by Plumeria to Aether Paradise. Lusamine was planning to use Cosmog to make an Ultra Wormhole to capture a Nihilego and to make Ultra Beasts appear in Alola. This plan works and leaves a mess for everyone because Ultra Beasts were everywhere. Lusamine is eventually stopped in Ultra Space and defeated. She is taken to Kanto to take all the poison out of her. This leaves Gladion as the new president.

It is revealed in the Post Game that the Aether Foundation had created Beast Balls to capture Ultra Beasts. (This is what Lusamine and Guzma used in Ultra Space!) They cannot be mass-produced, according to Wicke.

There have been many experiments and many accomplishments for the Aether Foundation. 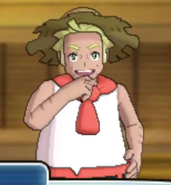