Aegislash is a single sword, unlike its pre-evolution, that is slightly golden in color and has a strange, jagged-edged blade outlined in white. It has a single, purple eye with a white pupil and no sheath, but instead a rather large shield with circular patterns on it being held by its "arms", which are purple cloth. In Blade Form, the purple cloth has a distinct curved pattern and the shield has a black solid coloration in the center of the circular pattern. In Shield Form, the circular pattern on the shield lacks the black coloration in the center and is white instead.

According to the Pokédex, Aegislash was used as a protector of Kalosian nobility. It uses its spectral powers to control the thoughts and actions of people or Pokémon. It is also able to detect the innate qualities of leadership and whoever it recognizes is destined to be a king. Hence, Aegislash has long been seen as a symbol of royalty.

While in Blade Form, Aegislash is able to slice through its opponents with its powerful blade-like body. It once served a king and drained him of his life-force, thus causing the king's kingdom to fall apart.

While in Shield Form, Aegislash uses its steel body and a force field made out of spectral energy to protect itself against incoming attacks. It has even used its spectral powers to force humans and Pokémon to build a kingdom of its liking.

It can learn the move Swords Dance and Sacred Sword, like Doublade and Honedge. Its signature ability is Stance Change, which can be activated by using an attack to change into its Blade Forme. In order for it to change back, Aegislash must use its signature move, King's Shield to change it back to its Shield Forme.

Aegislash is the evolved form of Doublade and the final form of Honedge. It can be evolved from Doublade by using a Dusk Stone.

Aegislash is based on a sword possessed by a ghost. With its ghost type, it may be based on Japanese myths of how katanas are said to act on free will while possessing the soul of their user. It might also be based on the legend of Excalibur, a legendary sword that can be pulled out from a large stone by a "true king" (who was Arthur); this ties in with Aegislash's Pokédex entry stating that it can sense a person's true leadership skills and make that individual a king.

Aegislash comes from Aegis (the shield Zeus and Athena used in Greek mythology) and slash.

Its Japanese name, Girugarudo, likely comes from Gilgamesh (a hero from Mesopotamian mythology), gilded (covered in a thin layer of gold or gold paint), and guard. 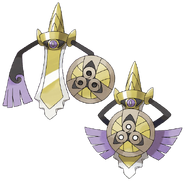 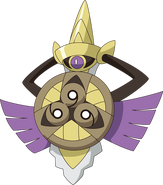 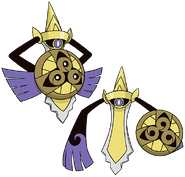 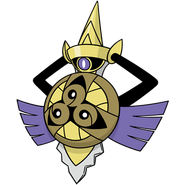 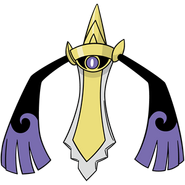 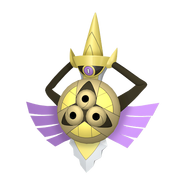 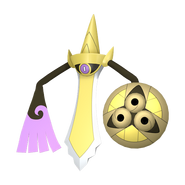 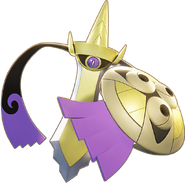 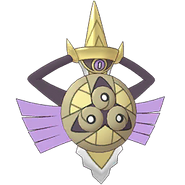 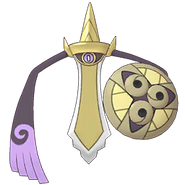 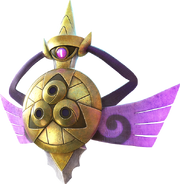