The Acro Bike is a trick bike in Hoenn. It is faster than the Running Shoes given to the player by his or her mother.

The Acro bike is capable of performing wheelies, bunny hops, and jumps. A wheelie is when the player leans back on the bike, lifting the front wheel into the air; this causes the bike to move more slowly. A bunny hop is when the player bounces the bike while performing a wheelie. The player can jump the bike in various directions. The Acro Bike isn't eligible for the record course of the Bike Path because it can turn more quickly than the Mach Bike.

How to obtain the bike

When the player talks to Rydel in his bike shop in Mauville City, Rydel generously gives the player the bike free of charge. The player can choose instead to receive the Mach Bike, a speedy bike, or swap it out later. A biker on the Bike Path points out that it serves as free advertising, because the bike says RYDEL all over it. 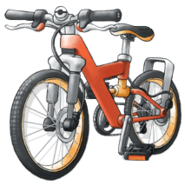 Acro Bike in Pokémon Ruby, Sapphire & Emerald
Add a photo to this gallery
Retrieved from "https://pokemon.fandom.com/wiki/Acro_Bike?oldid=585095"
Community content is available under CC-BY-SA unless otherwise noted.