Pokémon Wiki
Register
Don't have an account?
Sign In
in: Pokémon game characters, Female characters, Characters from Alola,
and 9 more

Acerola in other languages

Third
Acerola is a Trial Captain that specializes in Ghost-type Pokémon. She appears in Pokémon Sun and Moon.

Acerola is a young girl, who has purple hair and purple eyes. She wears a patchy dress of black, dark purple, and light purple, with two ribbons coming from her back, a gold arm band on her left forearm and light purple sandals. Her hair is a rather messy short bob with her bangs collected in a small ponytail, just above her forehead with a badge.

Throughout the game, Acerola strikes a playful personality towards the protagonist, Lillie, Nanu, and the other Trial Captains. She 'drags' Lillie along shopping, which is taken to mean that she enjoys shopping herself. She first appears when helping the protagonist and Lillie when the pair are searching for a book in the Malie library, to which she offers the book in a cheeky tone.

Her English and Japanese names, Acerola, both come from the "acerola" berry. It may also incorporate 褪せる (aseru, to fade away).

Acerola is a Trial Captain, who asks of the player character to take a picture of Gastly, Haunter, Gengar, and Totem Mimikyu. Before her trial, she can be met at a motel, where her siblings challenge the player character. Then she comes back right after the girl's Yungoos is stolen and orders to retrieve it.

Paranormal things start happening in the old supermarket and wherever there is one, there's a Pokémon there. Eventually, a door opens and the Totem Mimikyu appears. When defeating it, the player character has to leave the store and talk to Acerola again. She gives the Ghostium Z for completing the trial

Later, Acerola becomes the Elite Four member, who wishes to bring "the old royal touch" to the Pokémon League. 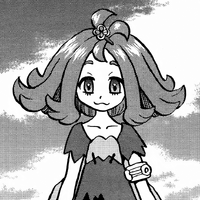 Acerola with Flint and Skyla in the Masters trailer (anime) 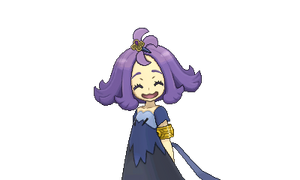 Acerola's VS sprite in Sun & Moon 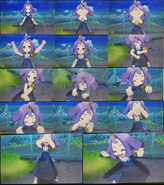