Generation I
Ace Trainer is a Trainer Class introduced in Generation I as a Cool Trainer, but was later called an Ace Trainer from Generation IV onwards. They are men and women who are skilled just like the player character and are found between mid-to-end game.

Like the player, they want to defeat the Champion and become the new Champion of their region. They are very common in all regions in every game and usually appear in the last gym of the game. Since they have very intelligent AIs compared to other trainers, they tend to use skilled Pokémon and, like the player, Gym Leaders, etc., switch out their Pokémon when needed.

VS Ace Trainer (Female) in Pokémon X and Y. 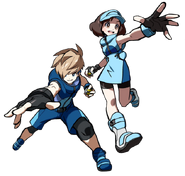