For the variant appearing in the games, see Aarune.

Aarune is a character appearing in Pokémon Adventures.

He is a young man with blonde hair that's tied into a ponytail and blue eyes. He wears a red cowboy hat with a blue stripe, a red scarf, white T-shirt, a brown belt, and red pants. He also has brown boots that have a yellow band around them.

Wally went with Aarune through the region to make a Secret Base. Since it did not suit Wally's needs, they were moving to another location. Just then, they found Sapphire, who fell off her Tropius. Aarune took Tropius to the Pokémon Center in Fortree City, then returned. Two days later, Sapphire woke up and was greeted by Aarune, who explained how he and Wally found her, commenting how she fell hard from Tropius into the water. They heard a strange noise and found Emerald, who used Hoopa's rings to track Sapphire. The ring was closed and Sapphire an Aarune came out, only to see Rayquaza, who was flying away.[1] Aarune watched as Sapphire forgave Ruby for hiding the truth and how they calmed down and rode Rayquaza. Aarune recalled the legend of a Hero from Unova, who also managed to touch the heart of the Legendary Dragon. However, Aarune heard something coming from his Secret Base, as Primal Groudon and Primal Kyogre emerged.[2] 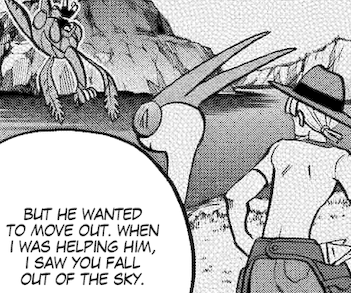 Retrieved from "https://pokemon.fandom.com/wiki/Aarune_(Adventures)?oldid=1134235"
Community content is available under CC-BY-SA unless otherwise noted.