Trainer
AZ is a character appearing in X and Y. Lysandre believes him to be a descendant of the original AZ, who built the Ultimate Weapon, but was far from the truth; he is in fact the very same AZ.

AZ is often depicted as an extremely tall man, standing over 9 feet (3 meters) tall in height, which is a side effect after activating the Ultimate Weapon. Having eternal life, but not eternal youth, AZ has aged well, having long white hair. His expression is usually dark and grim, being haunted by the memory of the travesty he caused in the past. Most of AZ's clothing is stitched-up; AZ wears a wool orange hat, a teal scarf, a roughed-up gray jacket with a sweater underneath, a pair of jeans and makeshift boots. AZ also wears a key around his neck, with a red gem engraved on the center, as well as black fingerless gloves, a large backpack and a metal knee cap on his left leg.

AZ used to be a dark and brooding man. He cares dearly for his Floette, but cannot seem to have a heart with because she was his only friend, and she went missing after discovering the truth about his Ultimate Weapon. When he is reunited with his Floette, however, he seems to regain a feeling for people.

3000 years before the start of the story, AZ loved his Floette dearly, but it went off to fight in a great war. A box holding only the flower Floette held was sent back to him, filling AZ with grief. He built a device that restored his Floette back to life at the cost of the lives of other Pokémon. However, the pain in his heart had not subsided, leading AZ to reconstruct the device into the Ultimate Weapon, which he used to wipe out many lives and bring the war to an end.

His Floette, having discovered the truth behind its returning to life, later left him, unable to see the Trainer it once knew. Feeling regret for what he had done, AZ took to traveling to find Floette to start their relationship over to make amends for his mistake.

AZ visited Sootopolis City and gifted the city a giant tree. He is also mentioned by Zinnia about his device to ending the Kalos War.

The player character first encountered him on Route 13 after taking on Team Flare at the Kalos Power Plant. He spoke about a "Flower Pokémon" given eternal life and departs. Speaking to others near the route revealed that he has been walking around for over 3,000 years.

Later, AZ was captured by Lysandre. He warned him about using the Ultimate Weapon by telling the tale of his own mistake in creating it but was ignored. Luckily, the Player defeated Team Flare and caught the Legendary Pokémon to prevent the Ultimate Weapon from being charged. With that, the weapon sank into the ground, vanishing everyone in the nearby Team Flare Secret HQ, including Lysandre, never to be seen again.

After the player character became the Kalos Champion and a ceremony was held to honor them and their friends, AZ challenges the player character to a Pokémon battle. After the battle, AZ regained the heart he once had, by coming to terms with what he had done in the past, leading to Floette returning to him.

During the Delta Episode, Wallace mentioned the tree being planted at the Cave of Origin was gifted from "huge man who visited from the Kalos region", indirectly referring to AZ. Zinnia also brought him up by calling him a "a tall visitor from a distant land" who commented on Rayquaza being "born of the great disturbances in this world" and "by the bonds born of mankind's wish and the power of the stones, it will calm the troubles that plague the world" after he witnessed how Rayquaza managed to halt a fight between Groudon and Kyogre. 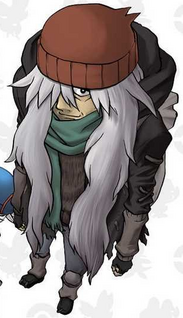 Retrieved from "https://pokemon.fandom.com/wiki/AZ?oldid=1338931"
Community content is available under CC-BY-SA unless otherwise noted.