The ??? type is a glitch type. There are, as of yet, no official Pokémon with this type, but most Glitch Pokémon have this type. Otherwise, it was used from Generation II to Generation IV and started to become absent from the code of every mainline game starting in Pokémon Black and White Version. It was neutral to every other type both offensively and defensively.

Instances of the ??? typing include: 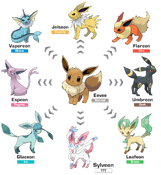